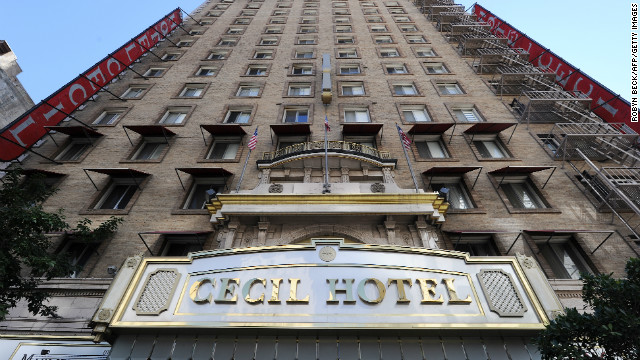 When 21 year old Elisa Lam’s body was found in a roof top cistern at the “Cecil Hotel” in downtown Los Angeles, a strange and morbid history of the building unfolded.

The 600 room hotel, was originally designed in the 1920s as a place “for businessmen to come into town and spend a night or two,”

But it was quickly upstaged by nicer hotels, in better areas and in the 1930’s became a place where people rented rooms long term, often, sharing bathrooms.

Tour guide Richard Schave said “This was a place where people who were down on their luck frequented.  These hotels, are filled with people who are on the edge of being integrated back into society.”

In 2007, three floors were renovated back to hotel rooms, and one section is used as a hostel for European travelers.  The remainder are long term rentals, or “SRO’s”.

Now on death row, Ramirez, labeled “the Nightstalker”, was living at the Cecil Hotel in 1985, in a top floor room.  He was charged 14 dollars a night.  In a building filled with transients, he remained unnoticed as he stalked and killed his 13 female victims. Richard Schave, said “He was dumping his bloody clothes in the Dumpster, at the end of his evening and returned via the back entrance.”

Jack Unterweger, was a journalist covering crime in Los Angeles for an Austrian magazine in 1991.  “We believe he was living at the Cecil Hotel in homage to Ramirez,” Schave said.

He is blamed with killing three prostitutes in Los Angeles, while being a guest at the Cecil.

In the 50’s and 60’s the Cecil was known as a place that people would go to jump out of one of the hotel’s windows to commit suicide.

Helen Gurnee, in her 50s, leaped from a seventh floor window, landing on the Cecil Hotel marquee, on October 22, 1954.

Pauline Otton, 27, jumped from a ninth floor window after an argument with her estranged husband, on October 12, 1962.  Otton landed on George Gianinni, 65, who was walking on the side walk, 90 feet below. Both were killed instantly.

There was also a murder of one of the residents.  “Pigeon Goldie” Osgood, a retired telephone operator, known for protecting and feeding pigeons in a nearby park, was found dead in his ransacked room on June 4, 1964.  He had been stabbed, strangled, and raped.  The crime still remains unsolved.

Frequent calls have been made to hotel management to ascertain if Ms. Lam was staying at the hotel, or in the hostel.  They have not been returned.  What caused her death is still unknown.