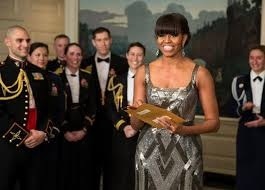 To a surprised crowd First Lady Michelle Obama looked exquisite as she presented via satellite from the White House. She and Jack Nicholson took turns presenting the best picture award. Adding her own flare and class to the award ceremony on Hollywood’s biggest night.

Before the nominees were announced the First Lady said this, “it’s through cinema, our children learn to open their imagination and dream just a little bigger and to strive every day to reach those dreams.”

The First Lady also mentioned the LGBT community in saying, “These lessons apply to all of us no matter who we are or what we look like or where we come from or who we love.”

The best picture at the 85th Annual Oscars was presented to Ben Affleck for his film ARGO.

“You got to work hard! You”ll get knocked down but you can’t hold grudges! Keep working hard.” -Ben Affleck

Achievement in Cinematography: Life of Pi