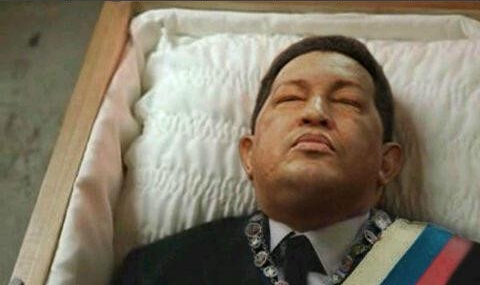 The former Ambassador of Panama to the Organization of American States (OAS), Guillermo Cochez, said Venezuela’s President Hugo Chavez suffered brain death and who had died four days ago. According to statements given to international news channel NTN24, “the president suffered brain death since December 31 and have been disconnected from the machines that kept him alive for four days.”

On whether Venezuela is prepared the worst news, the journalist said: “Not at all, people who can read the political news can be but most people do not, hence the opposition goes on to say that everything is a braid, the people Chavez want to be told what happened to his Commander President, some say he has died, I have learned that on December 30 was the first death, brain death.”

It requested through his Twitter account the Venezuelan government to file a proof that Chavez is kept alive. “They’ve been cheating on Venezuela and the world,” he wrote.

“The infighting in Venezuela, the Cuban government pressure, are situations that have not allowed the news of his death be released,” said the reporter Cochez
Pamela Silva.

“Chavez was taken to Venezuela because the Cubans did not want to give the disconnect there and have kept him from returning to Venezuela in that state. Would not have been able to teach Evo Morales and Ollanta Humala or Cristina Fernández” he explained.

After the diplomatic Cochez questioned Venezuela’s decision to postpone the oath of President Hugo Chavez to be receiving medical treatment in Cuba, Panama’s government decided to dismiss him.

CNN Chile consulted the Ministry of Foreign Affairs of Venezuela, who claimed that this version is not true and it contradicts the medical treatment that is currently performing the President of Venezuela. They refused further comment.
Guillermo Cochez, meanwhile, said Chavez died four days ago and asked her daughters to disconnect the ventilator which was connected to survive.

“Our commander is undergoing additional treatment, as we have reported, these treatments are highly complex and tough,” Maduro said in a ceremony broadcast on state television after reporting that he had just returned from Cuba.

Chavez was first diagnosed with cancer in June 2011. Castro sent an open letter to Venezuelan Vice President Nicolas Maduro that was published in the Cuban Communist Party’s Central Committee newspaper, Granma, reminiscing about when he first met Chavez in 1994.

The minister said “this development reached began implementing systemic medical treatment for the underlying disease as an adjunct to surgery December 11, 2012″

He said that the medical staff taking care of Chávez” is available for the Commander around the clock. They talk to him, take care of his treatment and are aware of everything that he has been through.”

Chavez, 58-years-old and in power since 1999, has not been seen or heard since last December 10, 2012 Venezuelan state television aired a few images of him just before leaving for the island to  have surgery.

Opposition leaders are demanding that the government provide more information about the condition of Chavez and want new elections.

According to Maduro, Venezuelan people are “supportive and loyal to Commander Chávez” amidst his illness.