Republicans in Texas against Pro-LGBT policies in schools

Republicans in Texas against Pro-LGBT policies in schools 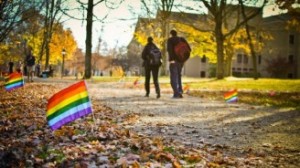 In Texas there are two republican lawmakers fighting to cut funding from schools because they support Pro-LGBT policies. School districts such as Pflugerville, who have began to support and recognize it’s LGBT teachers and offering them domestic partnership benefits. Now, state rep. Drew Springer (R) has expressed his displeasure and has filed bill HB1568. A bill that would cut 7.5% of a district’s healthcare funding if it supports giving benefits to LGBT staff and teachers.

“SPRINGER: Our tax dollars are for educating kids, not for enacting policies that attempt to get the state to recognize homosexual relationships. To think Pflugerville has sued the state for more funding, while at the same time bankrolling a lifestyle most texans do not agree with is quite disturbing to me.”

Rep. Matt Krause (R) has also voiced his displeasure with the LGBT community and schools in support of Pro-LGBT policies. Rep. Krause (R) has introduced bill HB360 which cuts funding for any public or private institution of higher education that requires student organizations to allow student participation regardless of status or beliefs.

In these two bills both Krause and Springer are welcoming school districts, colleges and universities to discriminate because of sexual orientation.