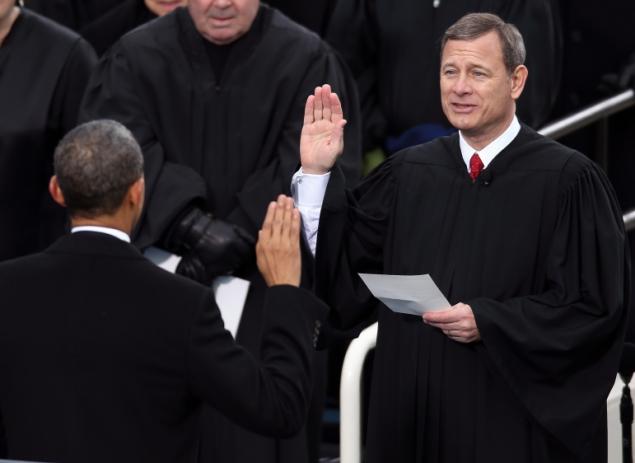 As an expected two days of hearings begin, both involving same-sex marriage, the Chief Justice of the Supreme Court will have his cousin in attendance.  She is openly lesbian.

In an open letter distributed by the National Center for Lesbian Rights,  Jean Podrasky writes, “Tomorrow, my cousin, the Chief Justice of the U.S. Supreme Court, will begin considering the fate of two of the most important cases impacting the rights of the LGBT community ever to go before the Court—the challenges to California’s Proposition 8 and the federal Defense of Marriage Act (DOMA). ”

Podrasky said that she believes her cousin is a fair man and will understand the changes in American society.  She also knows he is aware of the attitudes of the majority of our nation’s citizens.  She lives in San Francisco, and “can’t wait to marry her wonderful girlfriend.”

She was able to get her spot for this week’s hearings by emailing Roberts’ sister, then going through his secretary to get seats for her partner, her sister and her niece, according to the Times. The chief justice is aware that Podrasky will be in attendance.

This year the President, Hillary Clinton, and Massachusetts Gov. Deval Patrick have openly voiced their opinions.  And just yesterday Sen. Claire McCaskill, D-Mo., explained why she has switched her stand.

“My views on this subject have changed over time, but as many of my gay and lesbian friends, colleagues and staff embrace long term committed relationships, I find myself unable to look them in the eye without honestly confronting this uncomfortable inequality,” McCaskill said.

California’s proposition 8 forbids marriage for anyone other than a man and a woman.  The Defense of Marriage Act provides for the same.  Appeals have been filed against both to strike them down because they deny “equal protection under the law”.

Even former President Bill Clinton, who signed the DOMA in 1996 believes it should be repealed.