Kate Middleton and Kim Kardashian 5 things they have in common

The battle of royalty vs. reality 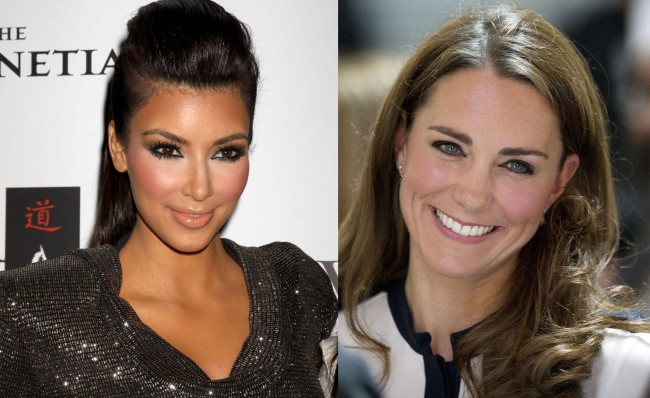 Kate Middleton, 31-years-old and Kim Kardashian, 32-years-old, have been unwittingly enthralled in head to head competition for the top spot in current news. Ever since they announced that they would soon be parents, people have been anxiously watching their bellies for any signs of a bump.

The battle of royalty vs reality has begun. Here are 5 things that Kate Middleton and Kim Kardashian have in common.

Both are expecting babies-
Most woman don’t reveal their pregnancy until they have had their 12 week scan to make sure everything nothing has complicated the process. But unfortunately, the Duke and Duchess of Cambridge did not have the luxury. That’s because, after Kate was admitted into the hospital with acute morning sickness, St James’ Palace confirmed her pregnancy.

Kim Kardashian was just as surprised as the rest of the world when rapper Kanye West publicly announcement the two are expecting a baby.

You may be surprised to learn that Kanye West was at Atlantic City’s Revel Resort Ovation Hall when he announced that Kim Kardashian was pregnant to a packed crowd of more than 5,000 fans. The rapper paused in the middle of his performance to reveal the wonderful news.

Both Babies are due in July-
Kate Middleton and Kim Kardashian revealed that they are both due to have their first child in July. The Duchess and Prince William confirmed the news back on Monday, Jan. 14 through St. James’s Palace, while Kim Kardashian shared her due date on the TODAY show that following Tuesday.

Both are married-
Kate Middleton is married, while Kardashian is, well, married; however, Kim Kardashian isn’t married to the father of her baby and there was some speculation that could potentially cause a hiccup once the baby arrived. Her divorce from her former husband, Kris Humphries, is not yet final, and there is a possibility that it won’t be in July. That means she could still be legally married to Humphries when she gives birth to Kanye West’s baby.

Both are fashion icons-
The fashion world is asserting that the reality star has more influence than the duchess has, when it comes to sparking trends. It’s no secret that “The Duchess Effect” can turn normally calm store-goers into ravenous, garment-hungry shoppers.

But now, Roland Mouret, one of Kate’s go-to designers, has said that she wields a little less fashion power than another public figure: Kim Kardashian.

“You don’t see hundreds of women running around looking like Kate. To be honest, we’re more likely to get orders on a dress that Kim Kardashian’s worn,” he told the media.

Both Donated cloths-
Kate Middleton’s benevolent heart makes it near impossible to dislike her as the expecting mother recently donated a hamper of baby clothes to the East Angelia Children’s Hospices. The clothes are being auctioned off to raise money for the Hospices’ $24,000 a day operating costs. Along with the hospices, Middleton recently pledged her services to The Art Room — a charity that uses art therapy to boost children’s self-esteem.

Kim doesn’t have to keep up with the Kardashians since she’s a hard act to follow. However, keeping up with Kate Middleton is a different matter altogether.

Well it’s safe to say, Kim is holding her own. Kardashian may not be married to a potential king but she is the queen of reality TV. The title of course comes with income perks. Recently, Kim’s wealth afforded  her the luxury to donate 100 pairs of designer shoes to the California Community Church.

Can you think of anything else these two popular celebrities have in common?

If so, write us so we can include your input in our next story about these two news hogging princesses.

Kate Middleton and Kim Kardashian 5 things they have in common added by gricelda7 on March 5, 2013
View all posts by gricelda7 →