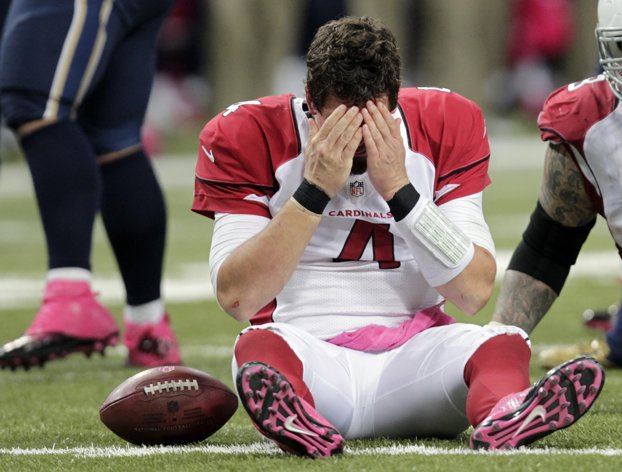 Kevin Kolb was released by the Arizona Cardinals today, before they had to pay him a 2 million dollar signing bonus.  He played two injury-ridden seasons in Arizona and was paid 20 million dollars.  He was acquired from the Philadelphia Eagles in a trade that sent a second-round draft pick and cornerback Dominique Rodgers-Cromartie to the Eagles.

Kolb averaged a completion record of 58 percent of his passes with 17 touchdowns and 11 interceptions. Sacks were a big problem, especially last season, when he was sacked 17 times in consecutive games, much of it to do with a struggling offensive line, but critics said the quarterback sometimes had a tendency to hold on to the ball too long, or take off from the pocket too soon when under duress.

Last season, Kolb completed just under 60 percent of his passes with eight touchdowns and three interceptions but was sacked 27 times in six games.

Arizona will be looking at available quarterbacks in the NFL draft, but are not expected to try and trade up.  They have the 7th pick overall, and are projected to select an offensive lineman.  Round two or three may see them draft a quarterback.

With the salary cap in place, Kolb’s 9 million dollar salary made it likely he would not be retained.  There was no serious effort to restructure his contract.

Instead, they went after Stanton.  Stanton received a three-year, $8.2 million deal with $3 million guaranteed. Skelton and Ryan Lindley remain on the Arizona roster. The team also has made a tender offer to Brian Hoyer, who was signed late last season and started the season finale against San Francisco.

Kolb was originally signed to a 5 year, 65 million dollar deal, with 20 million guaranteed.  He had trouble adapting to Ken Whisenhunt’s offensive scheme, and began the 2011 season with a 1 and 6 start.  He suffered a toe injury and was out of the lineup.  When he came back, he led the Cardinals to an overtime victory over Dallas, but was sidelined for the remainder of the season the following week when he suffered a concussion.

Kolb’s performance in Philadelphia prompted the Cardinals to trade for him and considered him their franchise quarterback.