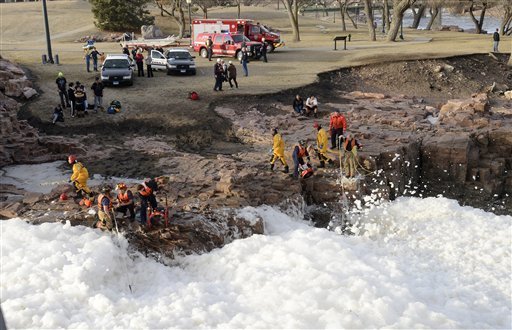 SOUTH DAKOTA – According to South Dakota officials, 3 people slipped into the frigid waters of the Big Sioux River, in the middle of a Sioux Falls park Thursday evening.  It happened in the 123 acres of Falls Park, which is named — like the city of Sioux Falls itself — for the series of picturesque Big Sioux River waterfalls that run through it.  The youngest was a 6-year-old boy who managed to scramble to safety.  The other two, one his sister, were swept away. As time passes, rescue efforts increasingly appear to be futile for man who slipped into the Big Sioux.

“These people literally jumped in without thinking of their own safety and trying to rescue that child,” Sioux Falls fire Chief Jim Sideras said.

The boy was playing in the foam on the edge of the river, and possibly into the rushing water itself.  His sister, identified as 16-year-old Madison Wallace, at one point went in after him and ended up falling into the surging water.

Sioux Falls police Chief Doug Barthel said a bystander, 28-year-old Lyle Eagletail, then went into the river trying to help.  He, too, was sucked in — but not before others at the scene did what they could to save him.

One of those who tried was Napoleon Ducheneaux.  His shirt was muddy and he told of how they tried to pull him back.  “We had him … but he just slipped,” Ducheneaux said.

“I heard him say, ‘Hold onto me, I’ll hold onto you.’ That was the last I heard his voice.”

Matthew Krier shared Ducheneaux’s sense of helplessness about not being able to do more.

“Hopeless, I felt hopeless,” Krier, who watched the scene unfold from a nearby bridge, told KSFY. “I wish there was something I could have done.”

Authorities brought in heavy equipment to break up ice on the river.  They stopped the river’s flow to restrict additional water to flow downstream.  Boats were sent out to try and find the victims, but zero visibility made it impossible.