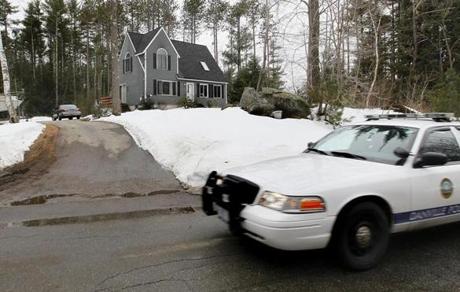 On March 11th, a fifteen year old boy found a loaded .40 caliber Glock 22 on top of a safe in a closet.  He used the revolver to commit suicide.

Danville, New Hampshire, Police Chief Wade Parsons left his home to run some errands.  The 15 year old son of his girlfriend stayed home alone.  When Parsons returned he found the boy dead from a gunshot wound.

There were no indications that the young man was suicidal, and Parson is not being charged with his death.  However, he was in violation of a New Hampshire ordinance which requires a firearm to be secured when a minor is likely to access it without parental supervision.

Rockingham County Attorney Jim Reams said that he hopes this tragedy will remind everyone of the importance of properly storing firearms.

“Nobody feels worse about this than the police chief,” said Reams. “But I hope it’s a reminder to people in New Hampshire to make sure that children don’t have unsupervised access to firearms. That’s the statement our legislature has made. We expect people to live up to it.”

Whether they be owned by law enforcement or a civilian, the number of existing firearms in the possession of individuals in the United States equals one for every person in the country.  For far too many they are merely toys.

In the past two weeks three children and another child’s mother were killed by a gun carelessly left in a place easily accessible to a child.  And they were loaded and ready to be fired.

I am one of many who are disgusted with the debate over guns.  The argument is less complicated than congress is making it appear.  It is a part of the universal fight within our country.

There is a ‘quiet’ war within our nation’s borders.  The battle is between money, and the right thing to do.  Money is winning, they have more weapons.  Guns are only the most recent battleground.  Backed by the NRA lobby, congressional puppets are surrendering to the minority and refusing to do what is right for the many.

We, the working class, are losing the war.  Money is winning every conflict, because our government has joined forces with it.  Money is becoming so powerful it is attaining “God” status.

The people have lost their leaders.  All of our generals have deserted and joined the other side.

We must resort to guerilla warfare.  Direct confrontation has forced us to retreat.  New strategy, new tactics are necessary if we are to survive.  A ‘divide and conquer’ approach may work.  Refuse to vote for the Washington gangs.  Don’t vote at all, and if you do, do not vote for an incumbent.  Professional Politicians are profiteers from the war.  They are the evil force that continually extends the war.

Wake up America, it’s your government that is violating the Constitution every single day.