Georgia firefighters held hostage after responding to a medical call 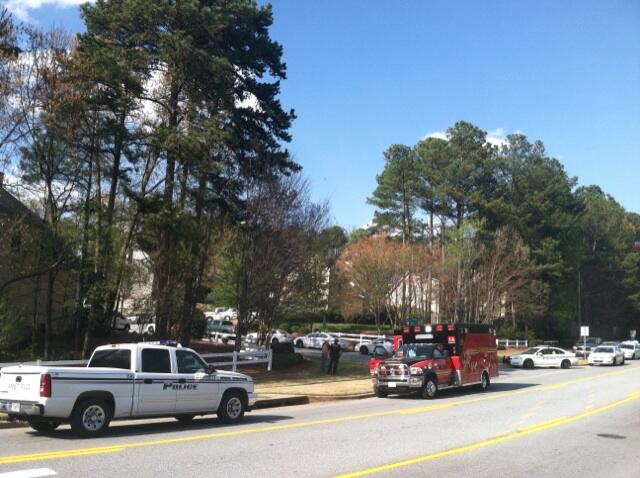 SUWANEE, Ga.— Authorities in northwest Georgia say a barricaded man is holding five firefighters hostage. The gunman allowed one firefighter to leave so he could move the fire truck.

Gwinnett County Police Cpl. Edwin Ritter said in a press conference one of the five firefighters initially held hostage has been released to move a fire truck. Ritter said the immediate area around the house has been evacuated and the neighborhood has been closed off.

“They arrived at the scene. They went in and began to do what they do every day when they were taken hostage,” he said.

Television helicopter footage showed police and fire trucks surrounding the neighborhood of mostly two-story homes and well-kept lawns about 35 miles northeast of downtown Atlanta. WSB-TV reported police asked media outlets to move their helicopters from the area near the house.

The county police department’s special weapons and tactics team is at the scene. Suwanee is about 25 miles northeast of downtown Atlanta.

Fire department Capt. Tommy Rutledge says there is no indication any of the firefighter has been hurt. He says the medical call seemed routine and firefighters did not believe there was any danger.

“Right now we just want our firefighters to be released. We want them to be able to go home safe to their families,” Rutledge told WSB-TV.

— An armed man who was having financial problems held four firefighters for hours in a suburban Atlanta home, demanding his cable and power be turned back on, before being shot dead when SWAT members stormed the house, authorities said Wednesday. The hostages had cuts and bruises from explosions that officers set off to distract the gunman before moving in, but they will be fine, a fire official said.

Minutes before the police announcement on the resolution, a huge blast could be heard a quarter-mile away from the home, shuddering through the Suwanee neighborhood, setting off car alarms.

Earlier Wednesday, five firefighters responded to what seemed like a routine medical call and were eventually taken hostage by an unidentified suspect inside the house, police said. The gunman released one of the firefighters to move a fire truck but held the other four.

Dozens of police and rescue vehicles surrounded the home and a negotiator was keeping in touch with the gunman, police said. The situation remained tense until the blast rocked the neighborhood of mostly two-story homes and well-kept lawns. Residents unable to get into their neighborhood because of the police cordon flinched and recoiled as the enormous blast went off.

Soon after the stun blast, officers exchanged gunfire with the suspect and a SWAT member was shot in the hand or arm, but should be fine, said Gwinnett County Police Cpl. Edwin Ritter. Ritter would not say how the gunman was fatally shot, saying it was being investigated.

“The explosion you heard was used to distract the suspect, to get into the house and take care of business,” Ritter said in a news conference minutes after the resolution. He said the situation had gotten to the point where authorities believed the lives of the hostages were in “immediate danger.”

The gunman, who has not been identified, demanded several utilities be restored, Ritter said. According to public records, the home is in foreclosure and has been bank-owned since mid-November.

“It’s an unfortunate circumstance we did not want to end this way,” Ritter said. “But with the decisions this guy was making, this was his demise.”

Firefighters were able to use their radios to let the dispatch center know what was going on, said Fire Capt. Tommy Rutledge said, and Ritter said officials decided to “get control of the situation” and do it swiftly.

The incident occurred about 35 miles northeast of Atlanta, in the Interstate 85 corridor, and Rutledge said the initial medical call seemed routine and firefighters did not believe there was any danger. One engine and one ambulance responded. Ritter said authorities didn’t yet know if the suspect may have faked a heart attack or some other problem to bring the firefighters to his home.

“Our firefighters responded to a call they respond to hundreds of times, and that’s a medical emergency,” Rutledge said.

Two ambulances could be seen leaving after the gunfire ended.

Asked what kind of weapon or weapons the suspect had, Ritter said he didn’t immediately know. He said investigators were in the house where the suspect’s body remained.

“In talking to the firefighters and their families just now, they’re relieved,” the fire department’s Rutledge said Wednesday evening at the same briefing, according to video posted by WSB-TV. “They’re simply relieved that the situation is over, that their family members are with them and that they’re safe.”

Georgia firefighters held hostage after responding to a medical call added by albert777 on April 10, 2013
View all posts by albert777 →