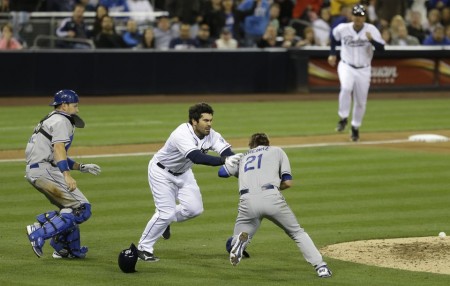 The Los Angeles Dodgers were in San Diego Thursday night to take on the Padres and all seemed to be going well. It appeared to be a good night for baseball down in San Diego that is until the sixth inning came around and as the Padres Quentin came to bat he was soon faced with a 3-2 count before being hit with a pitch on his left shoulder. Instead of heading to first Quentin begin walking towards the mound and after Dodgers pitcher Greinke appeared to have said something Quentin charged the mound.

Both players dropped their shoulders before Quentin wrestled Greinke to the grass with Dodgers catch AJ Ellis trying to pull Quentin off of Greinke.

Soon after both teams rushed the field, as both benches were cleared and both Quentin and Greinke found themselves at the bottom of the brawl.

After the brawl and the two players were separated, Quentin was led off the field by teammate Mark Kotsay as Greinke was checked out by the Dodgers trainer and the manager before walking off the field to the Dodgers’ dugout.

It will later be announced through the Dodgers official twitter that Greinke did suffer a fractured left collarbone and will see Dr Neal Elattrache in Los Angeles on Friday.

Zack Greinke through twitter stated; “I never hit him on purpose. He always seem to think I’m hitting him on purpose, but that’s not the case.”

Don Mattingly had this to say of Quentin charging the mound in the sixth; “Carlos Quentin shouldn’t play a game until Greinke can pitch.”

According to AJ Ellis through the Dodgers official twitter, the Padres players have apologized for Quentin’s actions as one player told him, “Its not right, its not right.”

As Matt Kemp who was visibly upset said, “That’s terrible for him to charge the mound like that. There’s no excuse for that.”

After things were sorted out, Greinke, Quentin and Kemp were all ejected and the Dodgers and Padres would take to the field to resume play.

As the eighth inning rolled around and as the Dodgers Juan Uribe came to bat he hit one deep giving the Dodgers a 3-2 lead for good.

Greinke has a history of hitting Quentin, the last time he hit Quentin was back in 2009. Now, the starting pitcher has hit Quentin a total of three times. Something the pitcher has only done against Quentin, making Quentin the seventh among current active players to be hit by a pitch, that’s 116 times in his career.

“Losing Zack stings, but we’ll pick each other up. Zacks like my little brother. Saw someone making fun of him being injured. Not cool!!” the Dodgers Jerry Hairston Jr said via twitter.

Major League Baseball’s the Los Angeles Dodgers defeat the Padres but not before a bench clearing brawl (video) added by Kelly Newson on April 12, 2013
View all posts by Kelly Newson →