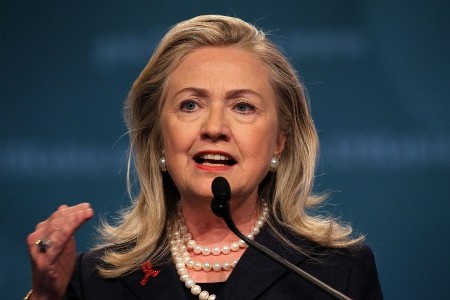 Former First Lady and former Secretary of State Hillary Clinton who is already being touted as the next presidential hopeful for the 2016 election will see her story come to life in a new biopic by Young Il Kim in the film Rodham. It is going to be interesting to see who will play her in the new biopic.

Young Il Kim’s project was ranked number four on last year’s Black List of promising up coming scripts. The list is an annual roundup of new projects that has previously included such box office hits as Slumdog Millionaire and The King’s Speech.

So from the outset, the signs are pretty good that the film will be a winner. But before the film can be made, actors and actresses will be needed to play the all important parts of the “pre-presidential” Bill Clinton and the “pre-first lady” Hillary.

Sources are saying that there are four well known actresses who are being considered to play Hillary in the film. According to the United Kingdom’s Sunday Times, actresses that have been “short-listed” for the role of a a younger Hillary Clinton, are: Jessica Chastain, Scarlett Johansson, Amanda Seyfried and Reese Witherspoon.

It seems that out of all of Hollywood these are the potential Hillary Rodham Clinton’s. Who the studios think should play her in the new biopic, the director certainly likes them.

According to the features director, James Ponsoldt, “They’re all wonderful actresses.” The Rodham director went on to say that, “We’re very fortunate that a lot of really great actors are interested in playing these roles. We’re in an enviable position.”

Interestingly enough, all four of the actresses are about ten years older than Hillary would be throughout the film. No reps for any of the four actresses have commented on the paper’s claims.

So we decided to have a poll and to ask you, who you think out of the four gals mentioned should be the one who portrays the “younger” Hillary Rodham Clinton. Do you think that Scarlett Johansson would be the perfect Hillary?

Or do you fancy Amanda Seyfried as the former State Senator’s more youthful self. (I have to admit, that I personally think Amanda is a shoe-in.)

Or do you think that some other equally talented, and perhaps younger, actress should fill the role?

Is there another blond who could fill Hillary Rodham Clinton’s younger shoes? So the question we’re asking is, who do you think should play her in the new biopic? Feel free to chose whichever one of the four actresses you fancy could do a great job or give us the name of another actress that you think is a better fit. Nothing to win, it is just for fun. So get voting! May the best actress win.