‘If I was Your Girl’ the season finale 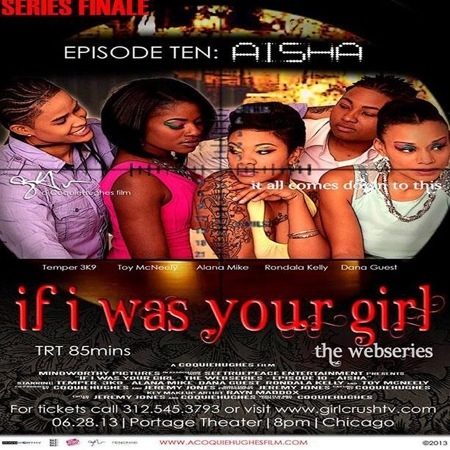 In a world where reality TV takes up most of TV programming and the LGBT community is rarely seen on TV and black lesbians are almost non-existent on TV. Coquie Hughes has introduced a hit film and web series.

Not since the cancelation of Logo TV’s hit series NOAH’S ARC has there been a series on network TV that contained members of the black LGBT community. There has been a void but independent filmmakers are not letting Hollywood standards stop them from creating series that they love. Instead are choosing to go the indie route and create their own for their fans on the Internet. From SUNNY REIGN to STUDVILLETV to IF I WAS YOUR GIRL. Black Lesbian filmmakers are in full force producing and funding their own productions. IF I WAS YOUR GIRL the feature film which premiered for the masses in 2012, still continues to achieve fans and success, a year later. The film which can be viewed on youtube has also achieved nearly 700,000 views. It has acquired a strong following and with such a talented cast the film was turned into a web series.

IF I WAS YOUR GIRL has transpired into a hit web series. Gathering followers from Chicago to San Diego and all over the U.S. as it leaves fans wanting more at the end of each episode.

Now, the hit series is preparing to close out it’s first season. Fans can watch episodes of this hit series on YouTube and purchase tickets for the season finale in Chicago at girlcrushtv.com. As well as purchase the DVD which contains the first three episodes and some bonus features.

Both the film and series touch on issues that all can relate to. From infidelity, to friendship, death and relationships. IF I WAS YOUR GIRL speaks on each of these issues. IF I WAS YOUR GIRL is a unique web series as it tells the story of black lesbians who’s lives intertwine for the better and the worst.

IF I WAS YOUR GIRL the season finale premieres June 28 in Chicago. Tickets available now for purchase at girlcrushtv.com

IF I WAS YOUR GIRL episodes 1-3