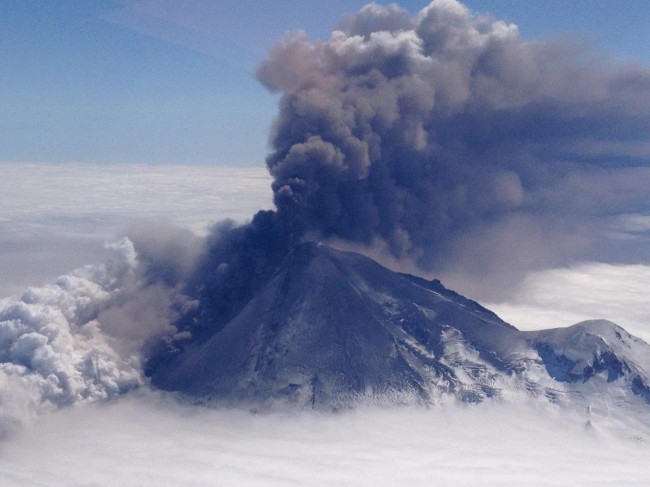 The Alaska volcano that has been spewing ash and lava for the past six weeks has erupted with new intensity early on Tuesday. The active volcano belched a column of ash and cinders five miles into the sky and onto a nearby town. Officials have said that the latest surge from the volcano has disrupted local flights.

Pavlof Volcano is on the Alaska Peninsula which is 590 miles southwest of Anchorage. The latest eruptions are its most powerful since it began low-level rumbling in mid-May this year, according to scientists who work at the state/federal Alaska Volcano Observatory.

The latest series activity sees more powerful ash-producing blasts from the crater of the 8,261-foot volcano which started late on Monday June 24 and continued overnight into Tuesday June 25 according to scientists.

Tina Neal, an observatory geologist explained that they don’t know why the volcano has increased its activity. She said, “For some reason we can’t explain, it picked up in intensity and vigor.”

But the recent Alaskan volcano erupting and causing disruption in the area was not a surprise as scientists have been watching Mount Pavlof since it first erupted in 1980.

The Alaska Volcano Observatory reports on Pavlof Aviation Color Code levels and Volcano Alert levels on a daily basis. The volcano has a threat score of 95 and the threat from future eruptions is considered to be high. Much of the threat stems from the possibility of disruption of nearby air routes by large releases of ash.

The mountain currently has basic real-time monitoring, but the United States Geological Survey, (USGS) would like to improve instrumentation at the site. The mountain shares a name with the nearby Pavlof Sister, which last erupted in 1786.

After its eruption in 1996, Pavlof Volcano entered a long period of dormancy entering the longest dormant period since records of its eruptions have been kept. This quiet period ended on August 15, 2007, with the start of a new eruption that included seismic disturbances and a “vigorous eruption of lava.”

Scientists said that the volcano “could be working toward a massive eruption that could affect air travel but was not expected to threaten any of the towns in the area.” The eruption ended on September 13. The volcano became active once again on May 13, 2013.

The Anchorage-based PenAir vice president Missy Roberts stated that the company have had to cancel one fight and that they have re-routed several other flights around the area.

The Alaska Volcano Observatory has reported that ash has covered the town of King Cove, some 30 miles southwest of Pavlof Volcano, with a dusting of the volcano’s fallout. The disruption will continue until the latest eruption of the Alaska volcan calms down.