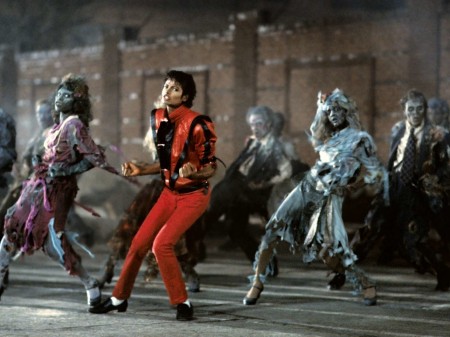 Amid the celebratory news that Paramount’s 3D World War Z  is “overperforming” with $25.5 million Friday and at least $63M for the weekend, the studio bosses are  giddy with relief after all that pre-film run up negative publicity for the film and  star Brad Pitt’s in his “Plan B-bannered zombie pic” has done better than expected. But it now turns out that the film may have a challenger. Brad Pitt revealed that there is a secret “Thriller” video in his possession.

The 49 year-old ‘A’ lister revealed that he has a secret tape of his World War Z zombie cast re-enacting the Michael Jackson Thriller dance from the 1983 Thriller music video.

Pitt, who has gone all over the world promoting his apocalyptic zombie horror film that is based on the 2006 book of the same name by Max Brooks, said that he was excited about the idea of showing the footage from the films cutting room floor that features the zombie extra’s daning to the Michael Jackson dance.

Michael Jackson’s 1983 Thriller music video, which was directed by cinema great John Landis, featured a voice over by the late iconic horror actor Vincent Price and showcased a dance scene where Michael and the “evil dead” join up for an extended dance. The video went on to become the biggest selling single on record.

The music video changed the way that the music industry viewed using videos to promote songs.

When Pitt was in the United Kingdom promoting his World War Z film, he talked to Nuts Magazine, a male oriented publication, and he told the magazine, “They did re-enact Michael Jackson’s ‘Thriller’ video and we have that on tape. It’s pretty special.”

We don’t know about you, but we think the very idea of the zombie cast re-creating the Thriller dance is really exciting. According to Nuts magazine, fans are eagerly anticipating seeing the footage. Footage that they think is certain to go viral.

Pitt says that they will have to wait to release the footage until the time is right. He said, “I’m going to show people one day. You know, it was more than we were working long nights there.” The actor went on to reveal that he had a lot of fun with his fellow cast members.

The four time Oscar nominated actor admitted that they did go to extreme measures to keep themselves entertained. He said, “We were up all night, so you need a little light-heartedness. We had a Halloween party out there and everything.”

Pitt plays the main character Gerry Lane and also produced World War Z. He insisted that Budapest produced the best zombies in the movie, so much so the crew brought the animated corpses back to film re-shoots. He said, “Budapest was great for it. The people were just awesome. The zombies were so good in Budapest that we had to bring them back for our re-shoots and use them again.”

World War Z sees United Nations employee Gerry Lane, played by Pitt, save the world in a race against time to stop the Zombie pandemic that is toppling armies and governments, and threatening to destroy humanity itself.

So while people are still queuing up to see World War Z in the cinemas, we can’t wait to see Brad Pitt’s secret Thriller re-enactment video. Maybe, it will be part of the DVD’s special features when the film is released in the home entertainment medium after its cinematic run.