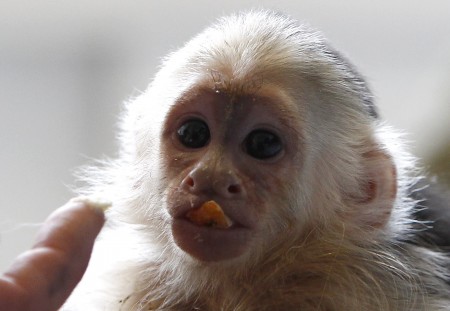 Justin Bieber’s monkey Mally is languishing on a monkey island in a German zoo after his once proud poppa deserted him in Munich without the proper paperwork.

The 19 year-old pop star had received his little chum, “Mally Bieber” back in March as a gift. Bieber decided to bring his furry little capuchin pal on his European tour. Unfortunately, no-one remembered to check if anything needed to be done for little Mally. Like paperwork or a pet passport.

Since Europe have pretty stringent pet control laws, although nothing like England’s, it was a forgone conclusion that the monkey was going to wind up in prison. Amazingly, the German officials gave Mally’s owner until May 7 to come up with the necessary paperwork that would allow him to re-claim his little pal.

But you know how it is, Justin was too busy terrorising his Calabasas neighbours and setting his bodyguards on paparazzi or innocent customers to be bothered to send the paperwork that would have “sprung” his little buddy from the primate version of “the big house.”

Or maybe he was too torn up about his split with girlfriend Selena Gomez. For whatever reason, Bieber just left Mally in Germany. Poor little fella! He must not be having a lot of Bieber-fever at the moment. Unless it’s a fever caused by a fit of anger at being chucked out like last night’s pizza.

German official’s have now “re-homed” the capuchin monkey in the Serengeti Park in Hodenhagen which is in Lower Saxony, Germany. They’ve put Justin Bieber’s monkey Mally onto his own little monkey island.

Not only has Mally been moved to a very nice safari type park, he was placed in the zoo’s new monkey area on Wednesday. An area that has its own tree-covered island, which is allegedly, dubbed “Mally-bu.” Like a lot of “monkey islands” it it surrounded by a moat and it comes with a house for all seven of its residents.

Because of his status as Justin Bieber’s deserted plaything, he was placed on the island first. A sort of solitary confinement by island, if you will. He well gradually get company and the zoo will gently re-introduce Mally to more of his own kind, at least according to the zoo spokesperson Julian Gunkel.

Speaking to CNN, Julian Gunkel said that the other capuchins, that consist of three males and three females; one of whom was born around the same time as Mally and is known as Molly. So in essence the island will have their own version of M&M (Eminem).

According to the zoo, it wasn’t good for Mally to have been with the Bieber anyway. He’s around 27 weeks-old and that would have made him only nine weeks-old when he’d been taken from his mother. Which is too young to be put into the world alone. Or with Justin Bieber which sort of amounted to the same thing really.

But apparently, Bieber isn’t bothered in the slightest about the whereabouts of his once “treasured” pet. According to the zoo’s officials, they have contacted Bieber through his people to let him know how little Mally is doing. But, they say, they’ve never received a response.

Mally appears to be adjusting well to his life “post Bieber” and according to zoo manager Fabrizio Sepe, “Mally is a clever little guy and we’re confident that he will settle in quickly.”

So Justin Bieber’s monkey Mally is on a monkey island and doing just fine, thank you very much. Although, since he’s been deserted and he now lives on an island, the zoo may want to change his name to Gilligan. Just a thought.