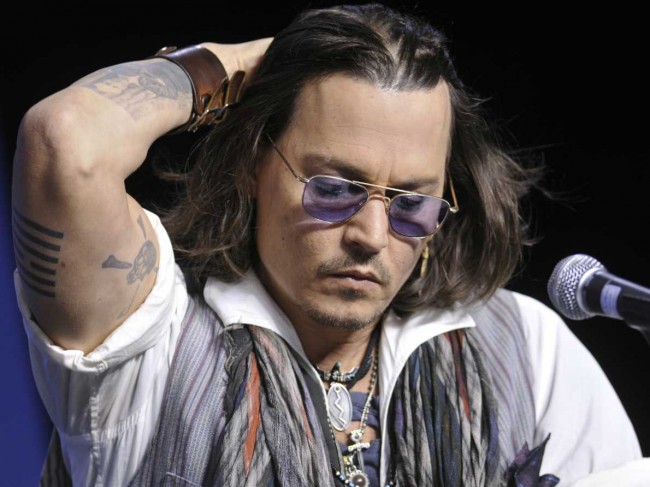 Johnny Depp is in town. Or more in dreamy, cotton candy, inhabited by Mickey Mouse town, because he was at Disney California Adventure on Saturday. Of course he wasn’t there to have fun with the rides there, but to promote his new movie: “The Lone Ranger.” As usual Depp stole away the lime light from any other celebrity present, and posed frequently for photos, and with ease. See the quirkiness’s unfold for yourself. 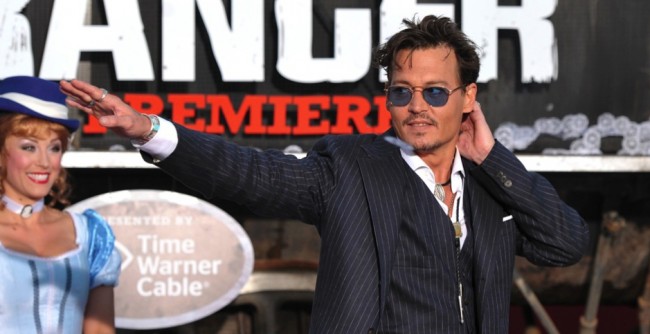 Most of his fans were in awe when they saw him on Saturday for “The Lone Ranger” promo. They love his persona on screen, and like how he is in person as well. However many wondered about his ageless appearance. Some speculated if he might participate in strange moonlit rituals of youth, or drink the blood of innocents. They accused him of using strange rituals to preserve his youthfulness (Another commentator wanted to point out that Johnny Depp and Robert Downey Jr. are turning into the same person over time. Or maybe they’ve been the same person the whole time!) Others came to a more sane conclusion that Mister Depp has some fine doctors on call who can administer botox whenever he needs it, or do some other type of medical treatments which enhances his fine features. (It could also be that Johnny has some great genes, and that he doesn’t need any external help, but alas, we’ll never know.)

One final fun point was made, that maybe it isn’t about using strange rituals to preserve youthfulness, botox, or even good genes, it might be that Johnny Depp, and Tim Burton have a Dorian Gray type of relationship. Remember Dorian Gray? (Not related to “50 Shades of Grey” but to the man with the painting that prevented him from aging. Because the painting aged but he didn’t.) However in this case Burton would be the painting, and started aging fast, and Depp would stay the same. Tim would probably do this for his muse, if it meant that Johnny would stay young for a long time, and they could continue making movies together. A sacrifice that would be worth it, for all of us.

A final thought on the promotional photo that was made during the Disney “The Lone Ranger” promo was contributed by Phresh. He said about the photo: Henri Cartier-Bresson once wrote, “But life is very fluid. Well, sometimes the pictures disappear and there’s nothing you can do. You can’t tell the person, ‘Oh, please smile again. Do that gesture again.’ Life is once, forever.” Nowhere is that evidenced more than in this fleeting moment of hesitance and yearning, frozen forever in our minds before the stillborn beauty of the Time Warner Cable promotional set.

How very true. It is fun to read what Johnny Depp’s fans have to say about his appearance, and persona. However he might feel a bit strange after reading that he is being accused of using strange rituals to preserve youthfulness. It might be a good thing that the fans decided to focus on that instead of on “The Lone Ranger” movie itself. Because most found his portrayal of “Tonto” quite disturbing. For now, lets focus on his strange ability of always looking so young!