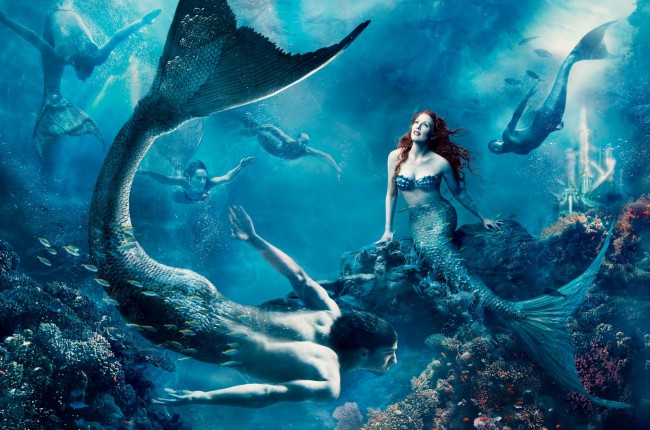 The Far East does not debate with the GuardianLV on the existence of mermaids. On June 22, the GuardianLV brought to every bodies attention that mermaids do exist. (Or that it would be fantastic if they did.) It was reported that: “Recently, Animal Planet aired a two-hour special about the experiences of Paul Robertson, a former employee of the National Oceanic and Atmospheric Administration (NOAA), who was investigating mass whale beachings around the world. This television program, “Mermaids: The Body Found,” which took five years to complete, gives compelling evidence that suggest mermaids could be real and perhaps still among us.” Full article

However it turned out that Animal Planet crafted this whole mockumentary. (Probably to get more viewers because they received several millions. Keep that in mind next time you watch the channel.) But does that make it automatically untrue and impossible for mermaids to have ever existed? In the far East they believe in the possibility.

Commenter Cjuan added: “Here in the Far East, we do not even debate the issue of existence of mermaids… in Thailand, for instance, occultists and sorcerers were known to use the tears of the mermaid to perform ‘magic’ and guarantee their clients success in many ventures.

To get the tears, they would have to wait for the opportune moment – a full moon’s night – for the mermaid would weep while viewing the lunar spectacle. They would collect the tears in a bowl and then use them accordingly. This is of course not an easy task… the client is expected to pay a lot, of course. The Thai magicians have to journey to the seas near to, or around the Philippines to locate the mermaids.”

However further research into Paul Robertson revealed that it was all a hoax. Albeit a cleverly crafted one and even a hoax with a sequel. But still. We have all been deceived. Robertson said: ““I wanted the story to appeal to a sense of genuine possibility, and incorporating real science and evolutionary theory and real-world scientific examples — such as animals that have made the transition from land to sea, much as we suggest mermaids did — and citing real, albeit controversial theories like the Aquatic Ape Hypothesis, grounded it. Using a straight, documentarian approach made the story more persuasive by appealing more to a sense of intellectual possibility as well as emotional possibility.”

According to Chris from Haboob USA: “The way they did the show was like telling a fabulous lie; you start off with minor details that could be true, building a case, using pseudo-potential anthropology to explain where we came from, what these strange noises in the sea were, why we lost our body hair, why we seem to have such an affinity for dolphins, how a fetus can survive without air and how that was a sign of humans ability, even throwing in some “government shut us up” scientists interviews; the story was weaved that in a way that there was nothing outlandish said. It is not until late in the show that it jumped the rails into complete fantasy world. It was very entertaining though, almost enough to have you believe the video by the time you got to it. Its a great trick, and honestly, one of the better pieces of fiction film work I’ve seen. Can’t blame people for being taken in, but there was a definite point when it turned to fiction.”

What do you think? Is this mermaid thing total fiction or do you agree with the Far East who does not debate the existence of mermaids because of past experience?