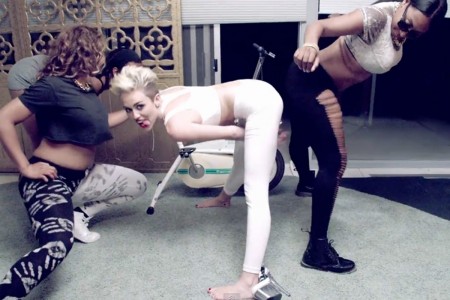 The amount of attention that Miley Cyrus’ new music video We Can’t Stop has been receiving, we wanted to sample a bit of this much talked about video. We watched it and the prevailing theme, in case you missed it, is sex and money baby. With a video that is filled with sexual innuendo, phallic symbols and money. You can watch the video below; see if you don’t agree.

Fans of the sexiest woman in the world winner have pointed out that Miley is taking to a whole new level with her latest video and we agree. She has also made a video where whatever statement she is making is done so with her tongue firmly planted in her bubblegum filled cheek.

From a ball cap wearing teen who is eating a sandwich of money to other symbols, beside the obvious dollar bills everywhere, which are meant to show obscene amounts of money being spent on stuffed animals, fur coats, parties, and an almost life-sized Barbie doll that you can lick.

Whatever Miley Cyrus is doing in the video, it is done in sheer clothing that is set to show off her body in ways that will probably have most young men, and not a few young women, rushing for a cold shower.

Sure, the words of the song spell out that Miley thinks that everyone is having one big party and all wanting to dance with Miley (or Molly, depending on what you heard in the song’s lyrics) and we think she’s right.

Who wouldn’t want to dance with a bubblegum popping minx with all that money, sex appeal and apparent fixation on all things phallic? Watching the video you can see that Cyrus hasn’t just left Hannah Montana behind, she’s trampled the poor innocent thing into the dirt.

As we said above, Miley Cyrus proves 100 percent that it isn’t about drugs, it’s about sex, music and money, baby. The We Can’t Stop video with it phallic symbols, moneyed and conspicuous consumption of piñata’s filled with hotdogs and stuffed animals on leads, spell out a very over-the-top wry commentary on the singers image.

Miley has been desperate to shake her Disney beginnings and she’s done it. While her aim has always been to be more grown up with her image and her appearance, she’s gone one step further and proved that she’s not only a grown up, she is a sexy young woman and a very self aware one to boot.

The 20 year-old pop star has made a music video that shows why she reached the number one spot on Maxim’s hottest women’s list for 2013. Miley is grown up and showing that hard work and focus on changing your image will give you results.

Of course the video isn’t just about sex, drugs and rock and roll, at least not in our eyes. It’s about Miley enjoying her success and riding the wave. While the video might be full of sexual imagery, it also shows a lot of young people just having fun. The video is full of silly images that reflect the strain of humour that runs underneath the sex and money messages.

If we were to do a recap of the We Can’t Stop video, we’d say the the overall message is that, “Sex sells honey. Don’t you forget it.” But while the prevailing theme appears to be one of ever present phallic symbols, money and sexy young things rubbing up against one another in physical ecstasy, Miley is also saying it’s okay to believe all the hype, because she knows that she’s worked damn hard to make it believable. Watch the video below and see what you think.