Brad Pitt GUNS Down His Own SON 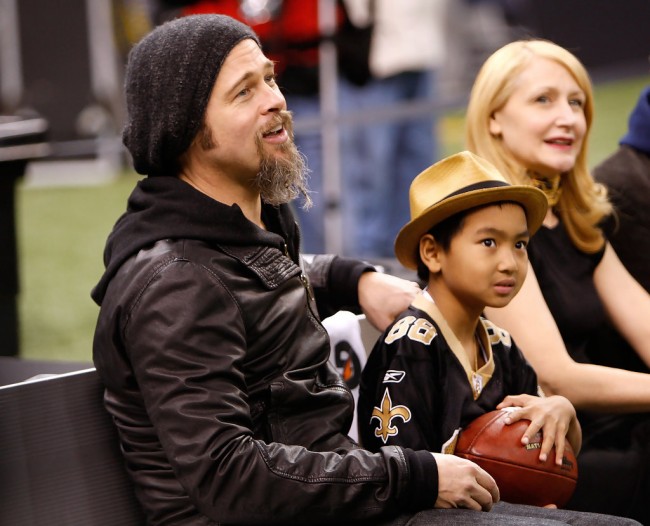 Not by accident, and thankfully not in real life, but in the new movie of Mister Pitt: “ World War Z.” Most parents would have loved to be in Brad’s position, at least for a moment. (Especially when the kids start whining about the latest “toy, tool, candy, no matter what thingy” that you deprived them of.) Trading places with Brad not only means you get to gun down your own kid, adopted or not, in a safe environment, it would also mean that you would be married to gorgeous, brave, and compassionate Angelina Jolie. Maddox, the adopted son of the power couple made his debut during this zombie riddled movie of his dad: “World War Z.” The critics haven’t stated yet if they liked Maddox and if poppa Pitt whacked him correctly. (It’s also not clear yet what Maddox plays, a zombie or human victim.)

Brad Pitt joked about when he guns down his own son: “He gets shot in the head … multiple times, I don’t know what that says about me as a parent.” The father and son duo are still going strong, so it can’t have been bad for their relationship. However if this was the best debut Maddox could have made, remains to be seen. Perhaps a better fit would have been a more serious movie with critical acclaim. Like “The Curious Case of Benjamin Button”, which won 3 Oscars.

Maddox isn’t the first Jolie-Pitt darling to follow his parents footsteps. (He was the first son who did.) The youngest female member of the family makes a special appearance in the upcoming film “Maleficient,” a live-action retelling of “Sleeping Beauty” that stars Angelina Jolie. For sure in that movie mom is not the one who guns down her own daughter. (There is no shooting anyway. Maybe some poisoned apple handling, but no gun fire.)

What do you think? Is it responsible parenting to feature your own son in a movie in which you have to blow his head off? Even though it’s fake, is it right? Do you feel sometimes like you would like to be on a movie set, and start shooting people, in specific your own misbehaving brats. (Of course it would be just for fun, and just to blow of some steam. No real injuries could be sustained.)

Angelina Jolie agreed to her hubby Brad killing her son, albeit on the silver screen, therefore she must think there is nothing wrong with it. However when Pitt guns his own son down, he is laughing about it, chilling or just funny? Does Angelina still think it was a responsible thing to do?

Also will they not regret these first steps taken on the acting career ladder? Both parents know how cut throat this business can be and how unforgiving. Even Brad and Angelina probably can’t protect Maddox from receiving bad critiques. Is he ready for that? Or should he continue being a child and worry about acting later? Was that the responsible thing to do? Start acting at such a young age?

One Response to "Brad Pitt GUNS Down His Own SON"