Deaf Can Hear Lame Can Walk 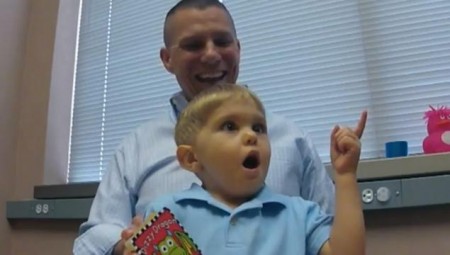 Miracles are becoming more and more the ‘norm’ in a day of increased scientific capabilities and strong inner resolve. Both Grayson Clamp and Aurthur Boorman are both amazing examples of what is possible in today’s world. Truly, with fortitude coupled with technology, we are finding the deaf can hear and the lame can walk.

Grayson Clamp is a three year old boy who was deaf from birth. He was born without the wiring necessary to bring sounds from his ear into the part of the brain that would register that sound. He is the first to receive the surgery for an auditory brain stem implant being tested by the FDA. Doctors at the University of North Carolina performed the medical operation that connected Grayson to his family in a brand new way for him. As he heard the words ‘Daddy loves you’, Grayson’s eyes lit up in a way they hadn’t before. His dad comments: “He looked deep into my eyes and he was hearing my voice for the first time. It was phenomenal.“

Len and Nicole Clamp adopted Grayson after deciding to foster medically ‘fragile’ children.  From the first day they had him though, they say he was theirs.  They never wanted to let him go.  His parents are watching him now as he takes in new sounds and the experience of hearing as never before – “He likes sound. He enjoys the stimulus, the input, “he definitely enjoys it” Nicole says.  A beautiful miracle in the  Clamp family as they experience what it’s like for the deaf to hear.  If we want to get biblical now, we can say the times of ‘Jesus’ are upon us – as we hear stories of Grayson Clamp who was once deaf and can hear and now the story of Aurthur Boorman – a war veteran many would consider lame- and his story of walking again.

Aurthur was a part of the first Persian Gulf war where he became badly injured and was in a wheel chair.  He gained a lot of weight.  He began using leg braces to help him try to walk, beginning his first steps in 2007.  “ I was morbidly obese. To be exact, I weighed two hundred and ninety seven pounds. I could only walk using crutches and leg braces.” He tells how he needed assistance to do the simplest of tasks and couldn’t even dress himself.  One day he did an internet search on the computer for ‘yoga and back injury’ and found DDP Yoga.

Aurthur’s transformation was incredible.  He would not give up.  No matter how many times he fell, he just kept getting back up again.  DDP, Aurthur’s yoga instructor, stuck with him and repeatedly reminded him that there were three things he could control about his situation: how he thought, how he breathed and what he put into his mouth.  This is true for all of us.  In Aurthur’s case it brought great rewards.  Watch his amazing transformation:

Many of us face challenges that may be physical, emotional or mental in nature. No matter what those challenges may be, I think we can all be inspired by Grayson and Aurthur and their miraculous stories of hope. It’s been said that if there is a problem there is always a solution, that the answer lies within the question. For these two stories we see that to be deaf doesn’t mean you’ll never hear and to be qualified as lame doesn’t mean you’ll never walk – they were just temporary labels to describe what both of these brave hearts were experiencing at one moment of their unfolding journey. We too can learn to examine the labels we give ourselves and question whether those labels are really who we are – or just a temporary stop off.