“He has a very big heart and he always manages to make everyone around him feel good". 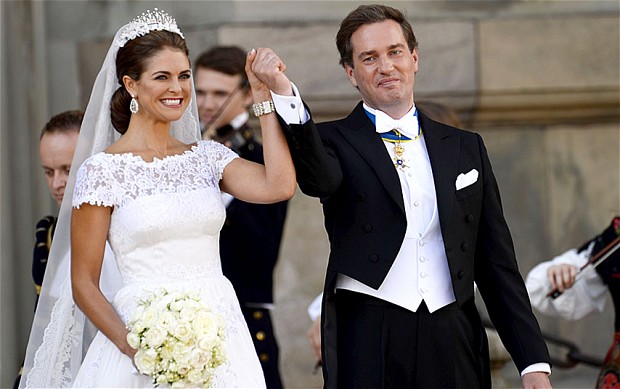 Stockholm, Sweden. The wedding bells were ringing, the kingdom was in state of happiness, fairy dust was falling and a carriage is making an entrance. Princess Madeleine (30) of Sweden married the New York banker Christopher O´Neill (38). The ceremony took place at the Royal Chapel in Stockholm. Mister O´Neill is British and an aristocrat socialite in New York.

She is the youngest child of King Carl XVI, she is the fourth in the line of succession, just behind Victoria, her niece Estelle and her brother Carl Philip. Her mother is Queen Silvia, whose mother was Brazilian and her father was German. The press was a bit hard on Queen Silvia at the beginning, because they didn´t know how well she would fit in, but with her charisma and work made the Royal Family popular again.

The couple made their vows in front of 500 créme dela crème from New York and of European royals. Among the royal guest were the princes and princesses of Norway, Denmark, Greece, Luxembourg and Monaco.

Another guests of the wedding were: Georg Von Opel, Joel Cadbury, Alejandro Santo Domingo and Aidan and Fizzy Barclay.

The Princess wore a gorgeous white lace-top dress, designed by the Italian Valentino Garavani. She looked stunning in the silk organza appliquéd ivory-coloured Chantilly lace. Moreover, the veil was silk organza and the shoes are ivory white organdy.

Royal fans where watching outside the palace hoping to see Princess Madeleine.

In an interview to announce their engagement she said “he is my soulmate”. “He has a very big heart and he always manages to make everyone around him feel good. He is an incredible thoughtful and generous person”. “We share the same sense of humor and have fun together” informed The Telegraph.

Christopher O´Neill has worked very hard to become a financial figure. He loves literature and Golf. He studied in Switzerland and in the United States. And Princess Madeleine is a socialite that loves fashion, horse riding, art, partying and skiing.

Her fiancé, the lawyer Jonas Bergstrom, had an affair. The couple were going to get married, but the wedding was call off after they broke up. Then, she went to New York to healed her broken heart, away from memories.
The fairy tale started when she was working for the non-profit World Childhood Foundation. They met through friends. It was love at first sight. He said that he felt “something very special”.

After the wedding in Sweden they will go back to New York, where surely they will have a nest kind of Penthouse-castle and live happily ever after.

By: Oskar Guzman
Source: The telegraph, The local, Wikipedia