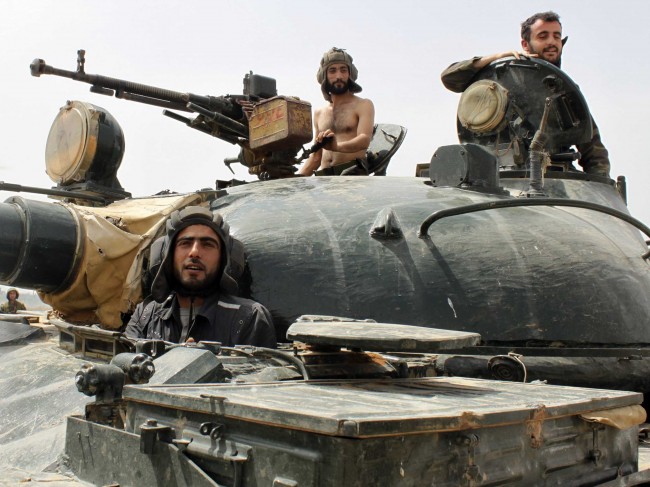 On Wednesday, the Syrian army, with the aid of Hezbollah forces, stripped the strategic city of al-Quasyr from the rebels in the on-going civil war there. Opposition leaders argue that the Syrian army’s victory was because they were  backed by the Lebanese militant group Hezbollah.

Syria’s state-ran TV stated that the Syrian troops took full control of al-Qusayr in the province of Homs from the rebels after more than two weeks of “precise” and “qualitative” operations were conducted against them.

After the Syrian army took control over al-Qusayr’s suburb two weeks ago, following 45 days of fierce battle, they next moved into the city of al-Qusayr itself.

The United States has condemned the actions taken by the Syrian army against the rebels during their assault on al-Qusayr, claiming the regime had relied on Hezbollah to win the battle.

The rebels charged that the Syrian army was aided by Hezbollah’s participation, and that was the deciding factor that tipped the balance in favor of the Syrian troops. They demanded that Hezbollah’s leader, Hasan Nasrallah, withdraw his fighters from Syria.

According to the Saudi-funded al-Arabia, Salim Idris, the leader of the rebels Free Syrian Army, said that around 15,000 Hezbollah fighters are currently fighting alongside the Syrian army nationwide.

Last month, in a statement that sounded eerily similar to ones that President George W. bush said when referring to the “war on terror,” Hasan Nasrallah defended his group’s involvement in the Syrian fight.

“If Syria falls into the hands of America or Israel, … the people of our region will enter a dark period,” he said, adding “If we do not go there to fight them … they will come here.”

A devastating 17-day assault led by Hezbollah fighters from across the border culminated in their regaining control over the city.

Arab League Secretary General Nabil al-Arabi said on Wednesday that the pan-Arab bloc condemned what he called the military intervention in Syria by Hezbollah.

The city of al-Qusayr is located near the border of Lebanon. The Syrian army’s operation against the rebel forces was aimed at cutting off their main supply line located in the central region of the country.

The Syrian army denied having committed any such massacre. In a statement, they said:

“We assure our people in general and al-Qussair’s citizens in particular that the army troops have evicted the civilians that were used by the rebels as human shields and the wounded people are being treated.”

They also called upon the citizens of al-Qusayr to go back to their homes.

Al-Qusayr lies close to the Lebanese town of Arsal, which has made it a main smuggling route of weapons and armed men into Homs. With the Syrian army regaining al-Qusayr, they have dealt the rebels a heavy blow by depriving them of their main supply line.

According to a White House statement issued on Wednesday: “It is clear that the regime could not contest the opposition’s control of Qusayr on its own, and is depending upon Hezbollah and Iran to do its work for it in Qusayr.”

The government breakthrough came a day after France said the international community had to respond to test results from both French and British laboratories confirming Syria’s use of the banned nerve agent sarin.

On Wednesday, US Secretary of State John Kerry said he had asked France to share its data.

In the meantime, a White House statement said: “The United States condemns in the strongest possible terms the Assad regime’s assault on Qusayr, which has killed untold numbers of civilians and is causing tremendous humanitarian suffering.

A spokesman for the White House, Jay Carney, renewed a call for Hezbollah and Iran to withdraw their fighters from Syria.

Opposition interim leader George Sabra conceded that they had lost the town of al-Qusayr, but declared they would fight on “until the whole country is liberated.”

Forces loyal to Syrian President Bashar al-Assad, emboldened by their success against al-Qusayr, will likely move on the central city of Homs next. Much of it remains in the control of the rebels.

Hours after Qusayr fell, two people were injured in the attack when at least five rockets launched from across Lebanon’s border with Syria hit the eastern Lebanese city of Baalbek, a Hezbollah stronghold.

According to British technicians who have confirmed the findings of French laboratories, sarin gas has been used in the Syrian conflict.

In the words of the UN Commission of Inquiry on Syria,there are “reasonable grounds” to believe both sides had used chemical weapons.

Washington has always said that confirmation of battlefield use of such weapons would be a “game-changer” for Western policy on the conflict, though what action might be taken under such circumstances has not been delineated by the White House.