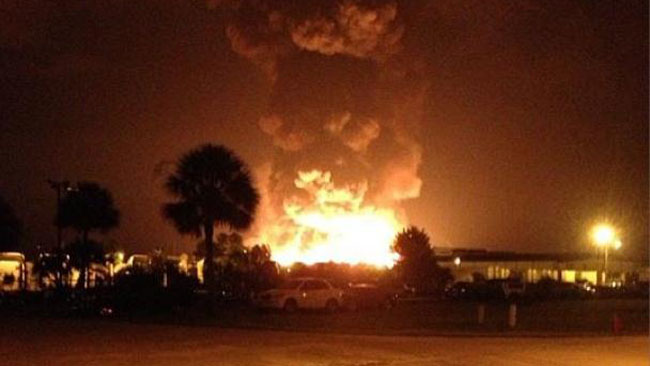 TAVARES – FLA., According to an NBC news report, a flurry of explosions overwhelm a propane plant as it burst into in flames in Tavares, Fla., on Monday night. Unconfirmed reports indicate that at least 6 people have been injured and 10 others are missing.

Authorities are presently evacuating the area as firefighters work help to rescue the injured. NBC also reports that 5 people have been airlifted to nearby medical facilities.

The blast is said to have went off at approximately 11 p.m. ET at the Blue Rhino plant located in Lake County.

Witnesses say that the explosions have been constant since they began and have been felt up to 6 miles away from the plant. According to one witness, the propane plant is replete with propane tanks stacked on pallets. Many of them are described as backyard grill tanks marked for distribution throughout the State of Florida.

The Guardian Express has no further information at the present time, however, we will update this story as soon as more information is available.

D. Chandler contributed to this report.