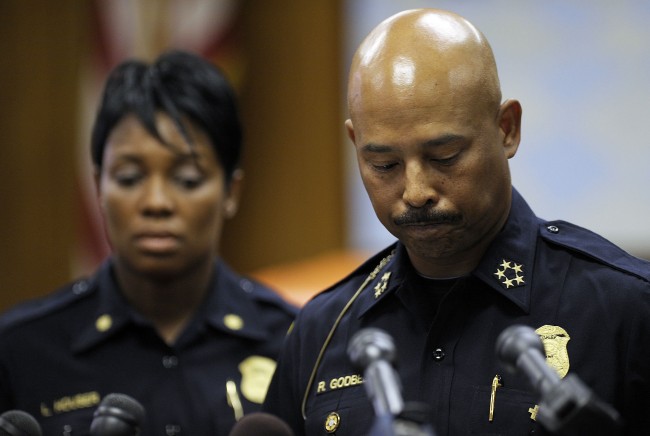 In 2012, Detroit, Michigan earned its latest nickname, Detroit Murder City, a take on a name which it was called in the past, Detroit Motor City. With a population just a few thousand over 700,000, Detroit had 411 murders, which is 1 murder for every 1,700 people. It was as if a case of madness had overtaken the city, fueled in part by the city being on the verge of bankruptcy and many policemen on the force taking early retirement rather than face further cuts to pay and benefits.

So far in 2013, up to July 8, according to police department statistics at their web site, there have been 159 homicides in Detroit. This is a 7 percent drop, according to Mayor Dave Bing, from the same time in 2012.

This slight drop is good news for a city which has fallen on economic hard times, and which has had its police force gutted.

Detroit is so broke that  Michigan named Kevin Orr, who is a lawyer who helped Chrysler through its own bankruptcy turn-around, as the city’s “emergency manager.”

This title mean that Orr has been handed the power to overrule elected officials and break agreements with unions. Because of this, police officers and firemen are reportedly retiring in droves rather than face (further) cuts to pay and benefits. The gutting of the police force has resulted in its being staffed at a fraction of what it was 10 or even five years ago. With far fewer police officers to send out on calls, low-level crimes are often ignored.

During the recent George Zimmerman trial, and in its aftermath, there have been those who have complained that the hundreds of people murdered every year in Chicago and Detroit have received relatively little media attention compared with the shooting death of Trayvon Martin in Florida.

That is why I chose to write about murders in both Chicago and Detroit. Yesterday, I wrote an article about the most recent murders in Chicago, and I mentioned a few of the reasons why that city’s murder rate is still relatively high, despite there being strict gun control laws in place.

Chicago, in 2012, had a population of approximately 2.7 million. The number of homicides was 532, higher than Detroit’s, though there were fewer homicides per person — 1 murder for every 5,075 people.

This comparison prompted a person who commented on  my article on Chicago’s most recent murders, Eddie Winslow, to write: “Detroit is a killing zone, Chicago is not.” Thanks, Eddie, for your comment.

Detroit does have more murders per person than Chicago, though the homicide rate in Chicago  went up nearly 17 percent in 2012, topping 500 for the first time in four years. Last year’s total was 532, as I mentioned, up from 433 in 2011.

One method that has been suggested to deal with the crime rate in Detroit is using volunteers. That doesn’t mean that they’d work for free, but they would be cheaper. The cost of operating 25 patrols is roughly the same as three police officers’ salaries. But, the volunteers aren’t nearly as effective, according to Robert Stokes, a Drexel University sociology professor who studies policing:

Research into town watch type patrols has shown pretty weak crime prevention outcomes. You can have all the volunteer patrols you want, because all they’re going to do is call the police when they see something. If they call the police and the police don’t come, what’s the point?”

One of Detroit Murder City’s recent murders occurred in Grosse Point Park on May 15.

After Myron T. Williams, 42, had marijuana charges dropped against him this past Friday, the Wayne County Prosecutor’s Office is now charging him with murder.

Williams is accused of strangling Sabrina Gianino, 35, inside her boyfriend’s home on Wayburn in Grosse Point Park.

Though he was not charged at the time, police arrested Williams, who lived next door, two days after the killing. A search warrant was also served at his home.

Williams was held by Grosse Pointe Park police until the new charges, first-degree murder, felony murder and unarmed robbery, could be filed Monday.

Williams has an arrest record and is on probation. He has felony convictions in Louisiana stemming from a simple burglary in April of 1994 and distribution of cocaine from Mach of 1993.

Gianino had worked at Platz Animal Hospital in Grosse Pointe Park. She was discovered by her boyfriend shortly after midnight when he returned from his job at Marge’s Bar. He called 911, was questioned and released. According to the police, they believe the strangling occurred about 11 p.m. the prior night.

On Monday in Chicago, at about 11 p.m. in the West Side’s Lawndale neighborhood, two shooters opened fire on a man and a woman sitting in a vehicle in the 4000 block of West Cullerton Street.

The man, who was 35 years old, died at Mount Sinai Hospital after being shot in the back.

The 37-year-old woman sitting with the man was also shot in the back, according to police. She was taken to Sinai, where she was listed in serious condition.

There were 209 homicides in Chicago as of July 4. Twelve people were shot and killed over the holiday weekend, and this past weekend, 4 more people were murdered by using guns.

The death today of the Lawndale man brings the total to 226.

Detroit is a city whose police force has been sadly cut. Criminals feel they have unbridled freedom to commit crimes there. The city needs to experience an economic renaissance to be able to gain back even a small portion of the ground they’re lost, though the drop in the murder rate is a promising sign.

Ending the madness in Detroit Murder City and the high rate of murder in Chicago will take a lot of hard work, and involvement at the state, federal, and local levels. Lowering the crime rates in both of these cities not only should be done, but must be done. Too much blood has been shed. Let’s end the violence, one day at a time.