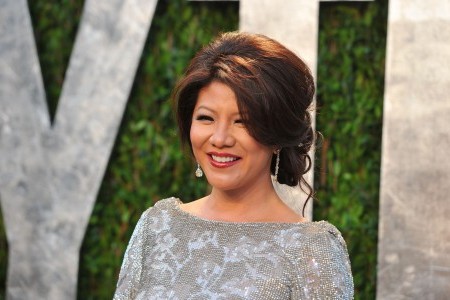 The 43 year-old Chen is an American television personality, news anchor, and she is a producer for CBS. She hosts the American version of the original Dutch program and she’s been the longest running host for any other country’s version since the show debuted on American TV in July 2000. Julie is also the co-host of the CBS daytime show, The Talk.

Season 15 of the CBS show has been hitting pretty high in the controversy department. With housemates being caught saying some pretty unpleasant things about their fellow contestants.

Julie Chen addressed the controversy surrounding racial, and homophobic, remarks On her Monday taping of her show The Talk. She revealed that she took the comments personally and that she was “offended.”

Two contestants, Aaryn Gries and GinaMarie Zimmerman were overheard talking in very “un-pc” ways of their fellow contestants and the overheard “live” remarks were later aired on an episode of the program.

Chen said, “When I first found out that Aaryn, who is a 22-year-old girl, made anti-gay, anti-black and anti-Asian comments, I have to be honest, the Asian ones hit me the most. It stung. I took it personally. I’m a human being.”

Julie also said that the comments made her feel ignorant. She said, “The year is 2013. I felt ignorant, there are still people in the country who feel and act that way? Yes, there [are]. It made me sad. She’s 22 and she’s college-educated.”

The Big Brother host also revealed that the comments made her think of her own experience with racism. She said, “The really sad part, it took me back to the ’70s when I was growing up in Queens and I was 7 years old getting bullied, being called a chink. I thought, ‘Wow I haven’t heard comments like that (in years).”

Julie Chen was obviously shocked as well as hurt by the racist comments made by the Big Brother contestants, although racism was not the only thing to rear its ugly head, in an effort to offend everyone, homophobia was represented as well.

The 22 year-old Gries was heard to make racist comments about fellow contestant Helen Kim. She said that she should “go make rice,” and another time she said, “I probably look like a squinty Asian right now.” There is also CCTV footage that shows Gries imitating Asian nail salon workers. She said, “Why you no have boyfriend? It’s because you don’t want long nail!”

Since this incident, Aaryn Gries has been fired by her modeling agency. Gries also made remarks about another contestant who was gay by referring to the contestant as a “queer.”

GinaMarie Zimmerman was caught by CCTV making racist comments as well. She was overheard to waht the a fellow black house member was on the dark side, “because she’s already dark.” Zimmerman, who is a pageant coordinator was fired from her job, like Gries, because of her racially inappropriate comments.

After apologies and the voting off of the offenders on the show, the network rethought their positon and the show continued.

CBS has issued a statement that says, the racial remarks are “not condoned” by the network and that they do not “represent the views or opinions of CBS or the producers of the program.”

It is a shame that the host Julie Chen, who felt the racist comments personally and was hurt by them, could not have reacted while she was hosting the show instead of having to wait and address the behaviour on her talk show.