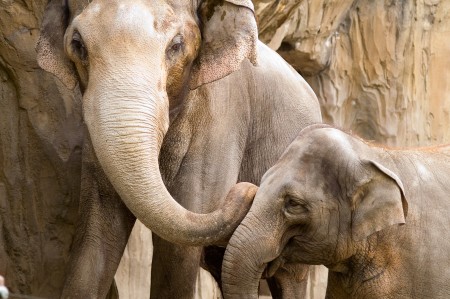 An elephants natural habitat allows them thousands of miles of roaming area throughout their 45-70 year lives. Daily, free elephants in the wild will walk up to 30 miles and stay active for 18 hours per day, according to PETA. In captivity, most zoos have allotted tiny spaces for elephants, often as small as 40-45 feet for these majestic animals(the size of a three-car garage). The Oregon Zoo has decided to expand their elephant habitat, perhaps greater than any other zoo, to the size of roughly six and one quarter acres, a major improvement.

With the giant project expected to be completed in 2015, Elephant Lands Habitat is one of the most ‘ambitious projects’ the zoo has yet undertaken since its opening in 1959. Expected to cost around 53 million dollars, this is just one of the changes taking place at the zoo just outside of Portland, though maybe the most significant one, especially for the elephants.

The new expansion will give Oregon zoo elephants more than four times their current roaming space- how’s that for an upgrade? “The current Lilah Callen Holden Elephant Museum will also be torn down and replaced with Forest Hall, the indoor exhibition portion of Elephant Lands.” This is more than good news for the eight beautiful gray residents who currently live there:  Packy, Samudra, Rama, Tusko, Rose-Tu, Chendra, Sung-Surin and Lily.

Though bringing wild animals into captivity is a wonderful way to educate the public and assist those animals with health concerns and who risk endangerment, the keeping of wild animals for simple pleasure and amusement is becoming a more sensitive topic for environmentalists and animal rights activists everywhere.  It’s hard not to wonder if these ‘zoo lifestyles’ are really benefiting the animals when you observe their gloomy disposition from over a cement wall, through a wire fence or glass window.

Will 6.25 acres be enough for the elephants of Oregon?  For many of the creatures who live there at the zoo, they have known no other life.  Still, something instinctual must weigh on their primal minds…something that speaks of limitations to what is possible.  For now, this zoo expansion project is a major win for the animals of the Oregon zoo who have long resided in crowded quarters.  Making larger roaming areas reduces the possibility of actually seeing the animals during visits to the zoo, but on-lookers may not feel so bad about that when they see the wide open spaces for their animal friends.

Yes, the Oregon zoo is expanding their elephant home, though PETA believes this is still not improvement enough:

Many zoos are investing millions of dollars to slightly increase the size of their elephant exhibits, but elephants in captivity don’t need a few more square feet—they need, at minimum, a few more square miles. Because of space limitations, zoos—no matter how well intentioned they may be—simply cannot provide for elephants’ physical and social needs. No amount of expansion at a zoo will give elephants what is truly necessary for their physical and psychological well-being.

Time will tell whether zoos continue to be the public attraction they are today, expansion or no expansion.  As awareness is being raised on the issues of size of habitats and treatment of animals, the public starts to raise a questioning eye whether we know what we are doing keeping animals in this way or not.  Until things change, you can visit the Oregon zoo and see their elephants now, and in expanded form several years from now – as well as elephants in zoos all across the globe.  What do you think about their homes there?