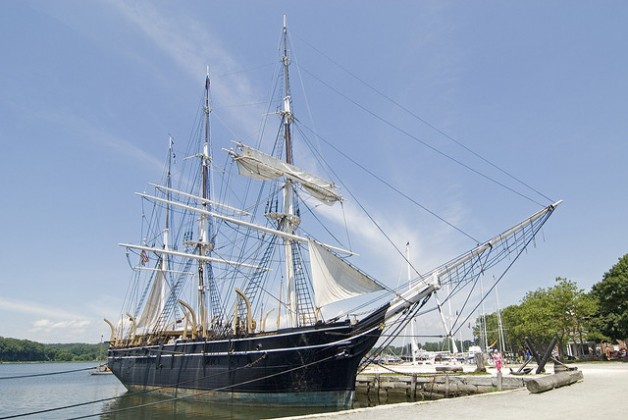 The launch of restored wooden whaling ship Charles W. Morgan at Connecticut’s Mystic Seaport Museum on Sunday, July 21, was accompanied by celebratory cannon fire and the cheers of thousands of visitors. Governor Dannel P. Malloy praised the dedication of the seaport and its supporters, which included organizations throughout the United States that offered labor and materials. The restoration of this 172-year-old whaler was done on site at the Henry B. duPont Preservation Shipyard. It had taken five years and cost approximately $7 million.

Charles W. Morgan is the last of the American whalers. She is also the oldest commercial ship still afloat–only one ship in the U. S. is older and that is USS Constitution, the Navy frigate launched in 1797. Morgan was originally built and launched in 1841 in the city that was the “whaling capital of the world,” New Bedford, Massachusetts. As one of over 2,700 whaling ships in the American fleet, she spent 80 years, or 37 separate voyages, hunting whales. She was known as a “lucky ship” because she always returned a profit regardless of rough seas, storms, or cannibals. As in Herman Melville’s Moby Dick, whaling expeditions often lasted three years or longer before returning home.

She did not hunt whales for sport. The oil was used most often in oil lamps and to make soap. Baleen or whalebone had many uses including corset stays, men’s collars, buggy whips, and cutlery handles. Scrimshaw, the carvings done by sailors in the off watches, were done on whale teeth and the larger bones. The engravings were usually of ships, but could be of any subject.

Morgan retired from whaling in 1921 and was used as a movie set before being purchased by an individual who had a waterfront estate near New Bedford. The whaler survived the 1938 hurricane and became part of Mystic Seaport in November, 1941. She was designated a National Historic Landmark in 1966 by the Secretary of the Interior.

The launch on Sunday signified the importance of maritime, American, and Connecticut history. She was christened with a bottle of ocean water by Sarah Bullard, a descendant of Charles Waln Morgan who was one of the ship’s original owners. Now that the whaling ship is back in the water, the museum is actively preparing for something that hasn’t been done since her whaling days. Charles W. Morgan will be embarking on voyage number 38, scheduled to depart Mystic Seaport in late May, 2014.

The 38th voyage will be for six weeks with stops at various ports along the East Coast. The ship and crew will undergo preparation and training for the challenges of ocean voyages. This will be done in New London’s deep harbor. From there, Morgan will sail to Newport, Vineyard Haven, New Bedford, Provincetown, Boston, then New London, and return to Mystic.

Each port of the ship’s journey will offer a dockside exhibit relating to that location. Sample exhibits are New Bedford, their whaling heritage, and where Morgan was built; Provincetown and whale watching in New England; Boston and the USS Constitution.

When she returns to her berth at Mystic Seaport, she will once again be an exhibit where visitors can come aboard. Her story combines the iconic American sailor, various cultures, the whaling heritage, and the ongoing relationship with the natural environment. Whales, in the past, were hunted to near extinction. Today, people marvel at their size and grace.