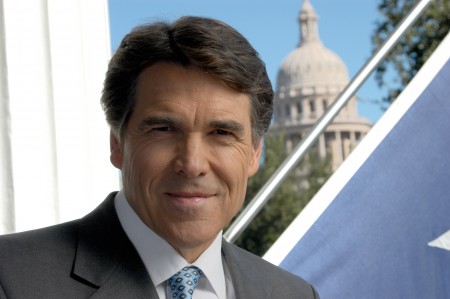 Rick Perry has been trying every trick in the book to pass the new abortion bill in Texas, and now, according to Addicting Info.org, the truth behind his extreme “desperation” has been uncovered. The bill’s passage would mean that his sister’s company could be poised to make big money from abortions. Milla Perry Jones, Rick Perry’s sister, is the Vice President of Government Affairs at United Surgical Partners International. In addition to that plumb position, she is also a board member at the Texas Ambulatory Surgical Center Society.

The Houston Chronicle reports the bill’s passage would mean that nearly all of the abortion clinics in Texas would close because they would not be able to afford to transform into official ambulatory surgical centers. The bill would restrict abortions to being performed only in clinics that have this designation.

Closing 37 of the 42 clinics in Texas significantly eliminates competition and gives the company the ability to offer and perform abortion procedures at a higher cost. This means low income women will have to pay more to get an abortion and Rick Perry’s sister will profit from it.

The fact that Perry is trying to funnel major profits his sister’s way should come as no surprise to those who view Perry as an unstable, almost manic politician. There have been whispers and even outright accusations in the press that Rick Perry engages in nepotism. Matt Taibbi, a Rolling Stone reporter, did a lengthy expose on Perry last year. Speaking about the Trans-Texas Corridor project, he writes:

Though most of the project was shot down by the state legislature, Perry did manage to push through several parts of it, most notably a few stretches of new highway construction around Houston and Dallas. Some of the beneficiaries of those projects were American firms that had donated lots of money to Perry and the governors association, like Williams Brothers Construction ($621,000), Parsons Corporation ($410,000) and JP Morgan Chase ($191,000). But another beneficiary was a Spanish firm called Cintra, part of a consortium that won the development rights for the original TTC project.

Cintra, Taibbi reports, employed a consultant named Dan Shelley who became Perry’s legislative liaison. His company ended up receiving 5 billion dollars in contracts from the state of Texas. In addition, Rolling Stone reports that, “According to Texans for Public Justice, Perry appointed 921 of his donors and their spouses to government posts over the past decade.” Nepotism? It surely seems so.

Given his history of engaging in favors, Rick Perry pushing legislation that will allow his sister to make big money and profit from abortions is certainly scandalous, but it is not really shocking. It actually seems like business as usual in Washington, where corruption is king and the politicians care for no one but themselves and their own friends and families.