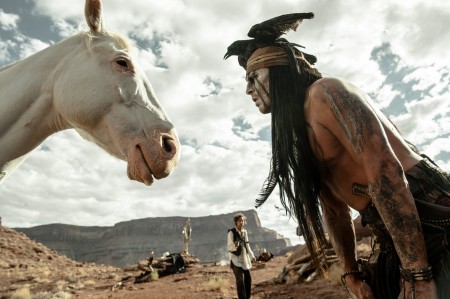 The Lone Ranger was born on radio. With a shout of Hiyo Silver, the masked ranger (Who was that masked man?) rode off or on to the William Tell Overture. He first entered that sagebrush stage on Detroit radio station WXYZ, with Brace Beemer as the masked man’s voice. It lasted an incredible 3,000 episodes. The silver bullet shooting avenger then made the transition to TV with the late Clayton Moore as the ranger and Jay Silverheels as his sidekick Tonto. But now, it’s more like The Lone Ranger is Tonto’s sidekick, or at least The Lone Ranger starring Tonto.

Gore Verbinski, Jerry Bruckheimer, and Johnny Depp have gone on record as saying that this iteration of The Lone Ranger is told from Tonto’s point of view. Now whether that is an effort to bring something different to the tried and true formula or because Depp’s name is a bigger box office draw, remains to be answered.

Depp has made a career out of playing characters that are, in a word, quirky. His most obvious two quirky roles are the Mad Hatter in Alice in Wonderland and Willie Wonka. Captain Jack Sparrow in Pirates of the Caribbean was quirky as well, but he was also charismatic.

Tonto was enigmatic in The Lone Ranger on television and it looks like Depp plans to take his level of enigma to a whole new level.

But not as high as was apparently planned. According to an interview with Armie Hammer, there was supposed to be a huge supernatural element to the film that got lost somewhere betwixt screen and storyboard. Although there is a bit of supernatural elements in the story, nothing remains of the original plan for those elements to rule the action.

Depp has said that taking on Tonto in the new Disney re-imaging of an old west classic was a definite challenge. During an interview, he was asked just how hard the role was. The 50 year-old actor replied in a fashion that makes it seem if the role isn’t difficult, he doesn’t want it.

CBS news correspondant Lee Cowan asked Depp, “How tough a role was it to play compared to everything else you’ve done?” Cowan asked.

With all this emphasis on Tonto’s white faced appearance with a dead crow on his head, it appears that both Verbinski and Jerry Bruckheimer intend this to really be the sidekick’s show all along. Because every time that Depp shows up on screen, your attention is drawn to that dead crow.

In fact the crow takes so much audience attention, that they could have called the film, The Lone Ranger: Three Amigos Go Riding. Now if only the crow could shoot…

But from the trailer alone, the crow-wearing native American and his sidekick The Lone Ranger look to have pretty equal measures of action and getting the better of the bad guys. Having watched the trailer several times now in order to get ready for eventual viewing of the film, it does seem like Tonto overshadow’s The Lone Ranger just a bit.

So perhaps, Verbinski, Bruckheimer and Depp are right. This is Tonto’s film, regardless of the fact that it’s called The Lone Ranger and if it weren’t for the fact that no one would rush down to see “The Tonto Show,” they probably would have renamed it.

We leave you now with said trailer and Jerry Bruckheimer’s last words on the subject, “We’ve created a much different character than you saw initially.” “Tonto was the servant of the Lone Ranger — ‘Yes, sir!’ It’s NOT that now. I mean, Tonto has his own demons and his own story to tell in this.” So welcome to The Lone Ranger Starring Tonto and a dead crow.