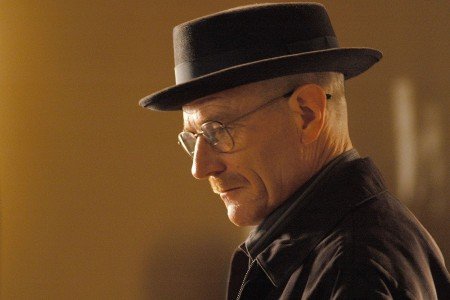 In the first season of Vince Gilligan’s Breaking Bad we meet Walter White. Chemistry teacher, husband and father, cancer victim and fledgling meth cook. Throughout the remainder of season one, and the following seasons we watch the transformation of Walter. We watch him steadily change from the first time he uses the name Heisenberg and his slow evolution from Walter White into the alter ego he has created.

When Walter starts out in his business venture with Jesse Pinkman, he has one goal. To accumulate enough money to take care of his family after he dies from his cancer. But Walt is in denial at the beginning. He goes through the motions in his everyday life. He only “comes alive” when he is cooking the meth and working to set up Jesse as the “dealer” in their partnership. In the beginning he is in a sort of fugue state. Not like the one he makes up later in season two as an explanation of his absence when he and Jesse are kidnapped by Tuco. Initially he is in shock at the unexpected turn life has given him and it takes time for him to adjust.

Walter is a complex man. When he first gives his name as Heisenberg he opens the door to another facet of a man who is anything but what he appears. When White’s backstory is given in dribs and drabs, we learn more of the built up disappointment and inner rage of a man who feels he sold out. His former business partners, Gretchen and Elliot are billionaires and he sold his interest in their fledgling company for $5000, an act that haunts him and causes him to hate his old partners. The hate is apparent when he confronts Gretchen in the restaurant and says to her, “F**k you.”

But in that hate filled moment, is it Walter or Heisenberg who reveals that hate?

In the beginning Walter White appears to be a Wilbur Milquetoast sort of guy. A great chemist who teaches high school. His lateral move into making and selling drugs appears clumsy and an odd choice for the “mild-mannered” teacher. But once he “invents” Heisenberg, he starts to change. His metamorphosis is gradual but total for all its slowness. As each season ends, he leaves more and more of Walter White behind.

Walter’s journey as Heisenberg takes him further and further away from the man he appeared to be at the beginning. His own DEA brother-in-law says at one point that Walter always struck him as mild mannered. As Walter White, that may have been true. As Heisenberg, it is not. But even as Heisenberg there is still something oddly likable about the man.

When he confronts the men in the desert who want to buy all his methylamine and not just part of it, his line, “Say my name,” and the resultant “You’re G**dam right,” not only brings chills but you have to resist cheering. After all, by this point, we all realise just how dark and deadly Walter has become as his alter-ego.

The duality of Walter/Heisenberg decreases as the show heads towards its final episodes. Where Walter could always be relied upon to show love and affection for his family, Heisenberg has pushed that part of Walter away. The innate darkness, the Dionysian side of Walter that is the evil drug lord, has taken over.

Indeed the evolution of the myth and legend that Walter first introduced back in season one is now complete. Even before he tells Skyler that he is the one who knocks on the door, another scene that induces chills, we know that Walter White is dead. He willingly self-destructed as part of his transformation into Heisenberg.

All the characters in Breaking Bad have undergone transformation. Each one is equally impressive and/or disturbing. But it is Walter White’s Heisenberg evolution that continues to grip the viewer and make them wonder what new atrocity he will come up with next. We have no doubt that he will do whatever it takes to succeed in making his legend become the new reality.