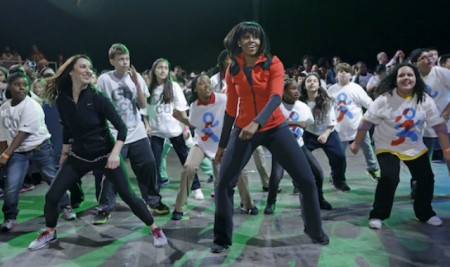 First Lady Michelle Obama is releasing a hip-hop / R&B combination album geared towards exercising and eating right. She has long been pushing healthy lifestyles for children since as one of her signature causes.

Obama started the “Let’s Move” campaign to bring an end to childhood obesity. Her primary goal was to help kids start the process of eating healthy in the youth with hopes that they would carry the same mentality into adulthood. More children are developing type2 diabetes than ever before. This is something, Obama, understands can be rectified simply by increasing activity and maintaining a healthy diet.

We live in a day where children hardly every play outdoors anymore. It’s no wonder with game consoles, mobile games on tablets and Smart phones, and a host of social networking sites along with good old cable that children are more sedentary than ever. Today’s children are growing up and out. Many kids today are less healthy than their parents.

According to Obama, what better way to get kids moving than with music? When she instituted the “Let’s Move” campaign she did it with a song. “Move Your Body” by Beyoncé and Swizz Beatz accompanied the campaign. There was also a video which was shot in a school where Beyoncé and a host of kids were dancing.

Her initiative was promoted to help kids increase physical activity but not alone; she has encouraged families, communities and school to offer support. It’s a way to get the family up and moving.

In keeping with the current theme surrounding regular exercise and a proper diet Obama is releasing this combination album which will include 19 songs.

No Obama won’t be rapping or singing on the album. Of course, the First Lady has partnered with some big named artist who can get the job done. She’s working with Doug E. Fresh, Jordin Sparks, Ashanti, and DMC to name a few. The name of the album is “Songs for a Healthier America.” Obama is wasting no time; the first video for the album dropped on Tuesday with Sparks and it’s appropriately named “Everybody.” Doug E. Fresh joins the video along with a fresh rap by Dr. Oz.

By simply getting up and dancing to some hits will be a great way to get these kids active. Music has long been used as a tool to enhance and even increase exercise. Dancing has the potential to burn a lot of calories without the feeling of work.

By next summer a total of 10 music videos from the album should have been released. These video will be given, free of charge, to schools in major cities such as New York and others.

The album won’t just cover hip-hop and R & B; it will also cover other genres such as pop and country. All of the songs will fall within the main theme of healthy eating combined with exercise. Obama believes that each and every child has the right to experience a healthy childhood.

Even though the numbers are still a bit high doctors have reported that they have finally begun seeing a significant decrease in the national obesity rate among children. Progress like this clearly says that a reversal of childhood obesity is not only possible but something that can be tackled when everyone joins in to help. While this report reflects significant progress, there is still a huge amount of work that needs to be done in order to support healthy lifestyles and futures for our children

The First Lady will release this album, entitled ‘Songs for a Healthier America,’ in connection with her ‘Let’s Move’ campaign. The 19-track collection features singers like Jordin Sparks, Ashanti and DMC. The full album is set for free download on September 30.