Ice in Greenland Melting Due to Heat from Earth’s Mantle 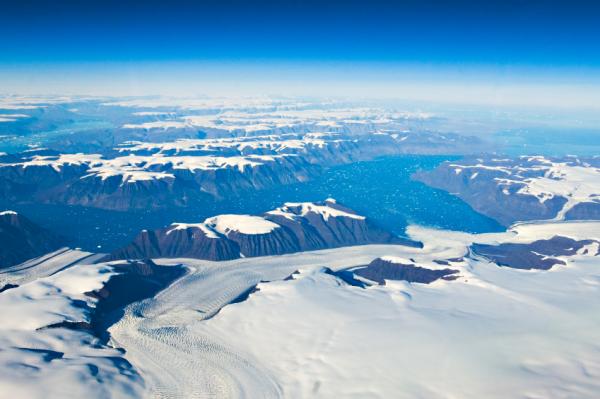 Though greenhouse gasses are playing a role, according to a team of international researchers, another reason why the ice in Greenland is melting is because of heat from Earth’s mantle.

The researchers believe that they are the first ones who have made the connection between the melting of Greenland’s ice sheet and the high heat flow from the Earth’s mantle.

They suggest that the findings could totally change the way future predictions on climate change are made, and the reasons behind why ice melts in Greenland.

Why  does the melting of the Greenland ice sheet hold so much importance?

The melting of the Greenland ice sheet potentially could raise sea levels around the world and flood low-lying coastal areas. That, along with how animals who rely on the ice — like polar bears — might eventually become extinct due to the ice melting is why  scientists, researchers, and the general public are so concerned with the melting of the ice caps.

If it completely melted, the Greenland ice sheet contains, in total, an amount of ice that would lead to a rise of global sea level by more than seven meters.

It has been particularly worrisome that the ice loss from the ice sheet has been increasing over the last decade.  Half of the ice loss can be attributed to changes in surface conditions. The remainder of the ice loss is due to increased iceberg calving. That’s  the process by which ice detaches from the glacier to become an iceberg.

According to the international research initiative IceGeoHeat, led by the GFZ German Research Centre for Geosciences, the effect of the Earth’s crust and upper mantle in the melting of Greenland’s ice sheet and in current climate modelling are too simplistic.

The researchers, when they  modeled the Earth’s mantle against the ice sheet, found that melting occurs in a given area due to the composition of the mantle underneath it.

The group’s research has been published in the current online issue of Nature Geoscience. They argue that,  when putting together data on climate change, this effect cannot be neglected.

How much ice has the Greenland ice sheet lost per year lately?

Greenland’s ice sheet loses about 227 gigatonnes of ice per year. It contributes about 0.7 millimeters to the currently observed mean sea level change of about 3 mm per year.

However, as the team points out, existing model calculations were based on a consideration of the ice cap.

When GFZ scientists Alexey Petrunin and Irina Rogozhina combined earlier ice and climate models with their new thermo-mechanical model for the Greenland lithosphere, they have found a much more accurate picture of what is occurring in Greenland.

We have run the model over a simulated period of three million years, and taken into account measurements from ice cores and independent magnetic and seismic data.”

In order to know more about current conditions in Greenland, it’s necessary to understand that the current climate is influenced by processes that go far back into the history of Earth.

Under Central Greenland,the Greenland lithosphere is 2.8 to 1.7 billion years old and is only about 70 to 80 km thick.

The coupling of models of ice dynamics with thermo-mechanical models of the solid earth, according to the researchers, allows a more accurate view of the processes that are melting the Greenland ice.

With this new understanding of the factor that heat from the Earth’s mantle plays in the melting of the Greenland ice sheet, will also come newer methods of dealing with the possibility that in a few short years, coastal areas might find themselves underwater.