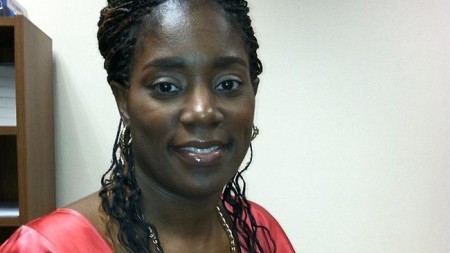 As the nation continues to heal from the Sandy Hook massacre, a twenty year old gunman by the name of  Michael Hill walked onto the Ronald E. McNair Discovery Learning Academy’s campus on Tuesday morning (August 20) and fired a round into the ground.  Ms. Tuff who later admitted to being afraid for her life after the ordeal was over, instantly called 911 when she heard the shot and handled the situation just like pro.  For just over twenty-four minutes Ms. Tuff can be heard talking to the 911 operator and the suspect.

At one point she offered to escort the suspect out to the police so that police wouldn’t shoot Hill.

So, what caused twenty year old Michael Hill to march onto the campus with a AK-47 assault rifle and 500 rounds of ammo, wearing all black?  For starters, it appears Hill wanted attention, was off his medication -he wanted to be heard- that is what he told Ms. Tuff, he told her, “call the news.”

“Just wants to go to the hospital.”

“Wants to go on the intercom and let everybody know he’s sorry.”

Thankfully, this situation did not turn deadly as no one was shot or killed and the suspect was successfully talked into giving up by the school clerk, Ms. Tuff.

Michael Hill also told Ms. Tuff that he had nothing to live for but the school clerk continued to talk to him, even going as far as telling him that she loves him and that she tried to killed herself after her husband left her after 33 years.  Ms. Tuff kept her calm throughout the ordeal and in listening to the tapes you would think she was a professional in these types of situations.

It took Ms. Tuff approximately eighteen minutes to finally get the suspect to surrender and to begin to unarm himself before lying on the ground and putting his hands behind his back.

After police entered to arrest Hill, you can hear Ms. Tuff say, “Let me tell you something baby. I’ve never been so scared in all the days of my life.”

The operator afterwards, tells Ms. Tuff that she did well and just a few days later, this past Thursday (August 22), President Obama called Ms. Tuff and thanked her for her bravery.

After last Tuesday’s situation, one wonders if perhaps schools should have a crisis team of some sorts, many gunmen of the past and present have all had some mental breakdown of some sort – it’s just a thought.