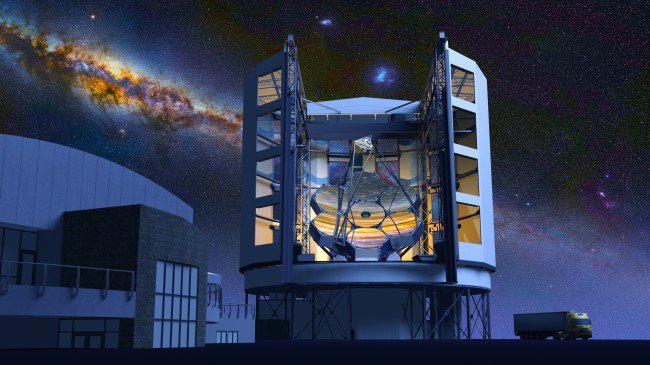 A new revolutionary telescope, called the Giant Magellan Telescope (GMT), is currently under construction. Excitingly, the device’s design is such that it will provide astronomers with a resolving power that far exceeds that of other telescopes. Could this be a Hubble-beater?

It is estimated the project will be completed within 10 years time, with the telescope’s final resting place being situated in Chile. Specifically, it has been indicated the telescope will be erected at the Las Campanas Observatory, northeast of La Serena.

The deserts of Chile are fantastic sites for situating stargazers and their astronomical toys. Chile’s Las Campanas Peak is one of the driest spots on the planet, and has an altitude in excess of 8,500 feet. Scientists believe that they can achieve ideal viewing conditions for much of the year, at this location, with no rainfall to impede their progress; this, combined with the clear night skies makes Las Campanas an essential viewing spot for scientists as the diffraction of light here will be much smaller relative to most other locations on Earth.

The Magellan Telescope’s design will offer a number of advantages over Hubble. The system is comprised of a series of segmented mirrors, amalgamating seven of today’s monolith mirrors. There will be six 27-foot sections all aligning the perimeter of a central mirror, which combine to form an optical mirror with considerable surface area; all in all, the overall optical surface diameter will be some 80 feet, improving the telescope’s resolving power considerably.

Magellan’s seven primary mirrors will reflect light from the distant reaches of space, which will then be reflected off seven secondary mirrors, each smaller in magnitude. This light will then travel to a sophisticated charged couple device camera where the distance, and nature, of the objects being viewed is assimilated through investigation of the concentrated light rays.

The primary mirrors’ fabrication process is quite incredible, which is currently taking place at the University of Arizona’s Steward Observatory Mirror Lab (SOML). The mirrors are made to a precise specification, with an exact shape, curvature and polish to enhance the telescopes optimum resolving power. The glass is mostly hollow, as it is manufactured using a honeycomb mold to substantially reduce the weight of the resulting mirror. 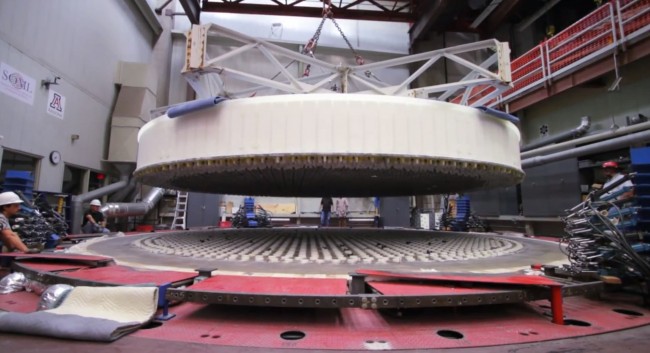 As the Giant Magellan Telescope’s mirrors are hollow, they are far easier to cool to ambient temperature and, hence, the influence of heat distortion can be limited to improve the telescope’s performance. However, the most groundbreaking feature of the technology lies in the secondary mirrors flexibility. These smaller surfaces can change shape to overcome interferences from the atmosphere. According to the Giant Magellan Telescope website, this innovative technology will “… transform twinkling stars into clear steady points of light,” enabling the radical system to become a true Hubble-beater.

The Magellan Telescope, although a long way off, promises to provide an abundance of new information about our universe. It has been suggested the system’s enhanced resolution could provide us with knowledge of extraterrestrial life, as well as better detail of extrasolar planets by reducing the glare from nearby star formations. The astonishing light-gathering capabilities of this new telescope could also help astronomers to unravel other complexities of the universe, and even provide new data pertaining to the Big Bang Theory, as well as our own origins.

Dr. Patrick McCarthy, the project’s director, ruminates over the Megallan’s potential to uncover the mysterious origins of black holes:

“… massive black holes are common and, in fact, almost every galaxy has a giant black hole at its center. And, extraordinarily enough, there seems to be a roughly constant fraction of the galaxy’s mass in the black hole… GMT, using the power of adaptive optics, will allow us to look at giant black holes almost anywhere in the cosmos…”

And this is just one of the many possibilities of the new telescope. The most exciting part of this development lies in new discoveries. We will, of course, learn more about black holes and neutron stars, but we might also unearth entirely new phenomena. The Giant Magellan Telescope certainly looks set to be a Hubble-beater and will, hopefully, advance our knowledge of space to new, dizzying heights.