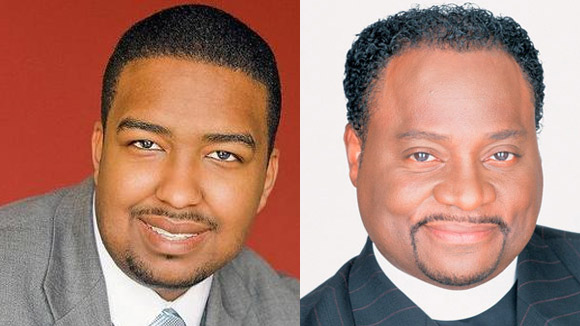 Ephren Taylor, the preacher accused of a Ponzi scheme which targeted church members across the country has been found hiding in Kansas.  Taylor is accused of swindling millions of dollars from members of Bishop Eddie Long’s New Birth Missionary Baptist Church.

After the Securities and Exchange Commission went to court to shut down this scheme, Taylor disappeared and Federal authorities hadn’t been able to find him.  Taylor and his wife were recently located in Lenexa, Kansas living under falsified identities.

Taylor, 31, first gained national attention with a rags-to-riches story of growing up dirt poor in Mississippi. After he gained popularity he traveled to different churches telling them that he was a financial adviser who had made his first million in his 20’s after creating a video game.  He promised he could do the same for his fellow Christians.

One Sunday morning in 2009, Eddie Long introduced Taylor to his church by telling them, “Everything he says is based on the word of God.” Taylor stepped up to the pulpit, took the microphone and the rest is history.

Taylor told the members that he was going to show them how to get wealth.  He was supposedly on a “Building Wealth Tour” which he used to travel the country and push self-improvement.  He was sure to follow-up by having private meetings with interested investors.

He gained investors or ‘followers’ from some very prominent mega-churches  He convinced many of the members of New Birth as well as Lakewood Church in Texas, to turn over their life savings to him and his investment firm.

The Securities and Exchange Commission (SEC) said Taylor was actually peddling a Ponzi scheme that swindled over $11 million from church members.  Earlier this year, a judgment was made against Taylor ordering him to pay more than $14 million, which included interest and fees.

He became popular with church goers because of his story and his philosophy of “socially conscious investing.”

One victim, Lillian Wells, said he got her by quoting scriptures to support his methods.  Taylor persuaded her to invest her entire life savings in a real estate venture.   He claimed it consisted of turning around homes in the inner cities of North Carolina. He promised her a return of 20 percent on her money.  Of course, he disappeared when she wanted her money back and left her with no choice but to file bankruptcy.

Wells said, speaking to her pastor Bishop Eddie Long, didn’t help either; all he said was, “‘the church ain’t got no money.”

Another set of victims from Texas; Gary and Anita Dorio, said they gave Taylor $1.3 million.  This not only included their life savings but her mother’s retirement as well.  They said in the first year Taylor sent them $11,000 every month. Whatever they asked for Taylor made happen.”

The Dorios said the paperwork looked legit.  They had pictures of the investment properties and whenever they called the phone was answered. They were under the impression that they were investing in an inner city laundromat,  gas station and juice bar.

As did all the other victims, they later found out that the businesses they were supposedly investing in never existed.

Although they are no longer members of Lakewood Church under Pastor Joel Olsteen, they did acknowledge that the church was careful not to unambiguously endorse Taylor.

At the onset of Taylor’s seminar, one of the leaders of the church announced that the church was not endorsing him nor were instructing them to invest with him.  They said we’re just here to hear what he has to say.

When asked about their involvement, Lakewood Church told ABC News that they allowed Taylor to speak to their members on “Biblical financial principals,” but when he transitioned to promoting his services as a financial advisor he was stopped

The SEC reported that Taylor spent his investors’ money on credit cards, car payments and a New York City apartment. He also shelled out money to pay for studio time for Meshelle, his wife. The couple even made a flashy music video entitled, “Billionaire” with Meshelle covered in white fur and diamonds.

In April 2012, an attorney representing Taylor claimed that Taylor was not hiding, but chose to stay out of the spotlight because of safety concerns.   Taylor also unequivocally denied that he scammed investment funds to finance an extravagant lifestyle.

Ephren and his wife Meshelle Taylor had moved to Kansas and initiated their own ‘witness protection’ set up.    Meshelle who was living under the name “Liz Taylor,” had secured a job at a salon named, “Panacea Massage.”

After a string of bizarre incidents, Meshelle’s co-workers became suspicious.  One salon worker even noticed that upon close review of Liz Taylor’s badge that her identification actually read Meshelle Taylor.  Once the salon workers made the connection that Meshelle was the accused conman, Ephren Taylor’s wife, they contacted one of ABC’s sources.

Upon traveling to Kansas they found Ephren and Meshelle Taylor at an apartment complex.  The Taylors would not answer any questions and eventually responded on camera by saying, “I have no idea.”

Who knows where they will turn next but what continues to prove true is self initiated ‘witness protection’ stunts always fall through.