Steve Jobs Biopic Success is Sexy Getting There is Not 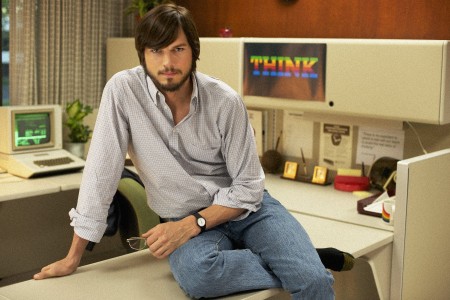 There is a phrase that real estate agents use: Curb appeal. It means how a property looks from the outside. Houses that are easy to sell have bucket-loads of curb appeal. And on the outset, the Steve Jobs biopic has cinematic curb appeal. It lays in the fact that Steve Jobs was successful at changing the world, and success is sexy, or has “curb appeal.” But the act of getting that success, the nuts and bolts of getting there, is not.

Casting the charismatic crowd, and teen, pleasing Ashton Kutcher was the first step in the process of making the real Steve Jobs more sexy, more salable as a cinematic story worth telling. But do the sums of any man’s life really equal fascination from complete strangers?

As the reviews of Jobs come in, it seems that not even the icon that was Steve Jobs is worthy of an over two hour film. It isn’t surprising after all. The sum of one man who filled the shoes of guru while he as still alive is interesting. The story of a man who was in reality a maverick who dropped out of college and with the help of a like minded individual (Steve Wozniak) started a computer revolution in a garage, even more so.

So where does the film fall short?

Wozniak himself has professed disappointment with the finished product that is Jobs the film. Part of that may have to do with his involvement with another biopic of Jobs that is underway, but it could be that he knows better than anyone else that the film has had to fictionalise the facts. He should know, he lived through part of the reality it is based upon.

Unfortunately, no matter how you write it or sell it, business is boring and often mundane. It only becomes interesting after the fact. When the businessman, which is basically what Steve Jobs was (albeit a visionary one) actually becomes successful, any apocryphal stories about the “nuts and bolts” of how he or she got there are only interesting to those who were part of that rise to success.

The bottom line is that the sweat and tears spilt on the way to succeed at your goal is not sexy at all, unlike the cartoon character Pepe le Pew whose catchphrase was “Getting there is half the fun,” in most cases it isn’t true, not even the great Steve Jobs climbing the ladder on his way up can be considered sexy.

Woz has gone on record saying that the real people that he saw portrayed in the biopic would be upset to see how they were represented in the film. Critics have come forward to say that the film is a glamorized powerpoint presentation and an incomplete one to boot. The film stops telling its story just before Jobs pulled his phoenix rising from the ashes trick with the iPod.

People in the industry are saying that the door has been left open for a sequel, and Hollywood does love its sequels, but despite Ashton Kutcher having loads of that “curb appeal” is it enough to bring folks back for Steve Jobs Part II?

It is highly doubtful. Yes, Steve Jobs was a visionary, but it took him a damned long time to get there. LSD trips, Buddhist teachings to learn, and a re-imagining of his initial vision as well as losing his family and friends while he pursued his obsession with thinking “outside the box,” all had to happen before he became an icon.

There is no doubt that the story of Steve Jobs is interesting, and even fascinating to some, but where his success could be considered sexy enough to build a film around, the backstory of his getting there is not. Therein lies the problem with Jobs the movie part one. Perhaps part two will have that bit more panache and curb appeal.