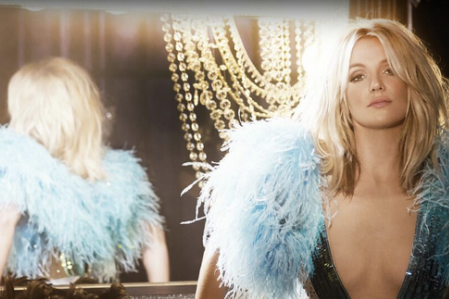 Put it down to getting too caught up in all the Breaking Bad hype around having only three episodes left in the series, but Britney Spears new song, Work B*tch sounds just like a Breaking Bad ode to Jesse Pinkman. You can just hear Jesse saying the chorus, “Work b*tch!” We have included the “official” version of Britney’s song below.

Britney had to move up the official release date of her new single to Sunday September 15. She is not alone in having to work around hackers. Katy Perry and Lady Gaga also had their releases leaked early. While Perry took it in stride, Mommy Monster lost her cool and had a good old Twitter rant to her fans.

When Spears heard the poor quality of her leaked song on the net, she went ahead and formally released her comeback track on the radio for her fans.

The 31 year-old performer was  going to premiere the song on Monday. The song Work B*tch was a collaborative effort between Spears and will.i.am along with Otto Knows who wrote the song. When she found that the song had been hacked and leaked over the internet over the weekend she jumped into action.

The song is a great comeback for Spears, despite sounding to us like a Breaking Bad ode to Jesse Pinkman. It would be great if Aaron Paul, who plays Jesse in the show, could do a duet with Britney.

Spears got onto her Twitter account and tweeted on Sunday that she’d gotten up and found that a low quality copy of her single was out. She went on to tweet that all three of them had worked hard on the song and she wanted her fans to hear the it “like you’re supposed to…” It was apparent that Britney had just woken up as she also tweeted: iamwill OttoKnows.”

Those half-asleep tweets can be embarrassing.

The song had been in the news even before the weekend hack. it seems that Sebastian Ingrosso, the DJ from Sweden was not too happy at being credited for the final version of Work B*tch and he decided to speak out about the song.

Britney had released the song’s lyrics online which included Ingrosso on the credits as being a songwriter for the comeback single. The DJ attempted to put a bit of space between himself and the song when he saw the post online Wednesday September 11.

Ingrosso went on record as stating that the lyrics had nothing to do with him and that he had not worked on the track at all. He insisted that he had only passed the song onto will.i.am, the frontman for Black Eyed Peas, to be used for Britney’s latest project. Ingrosso was adamant that Otto Knows was the creator and not him.

Despite the leak and despite the somewhat confusing issue of Ingrosso wanting to distance himself from the song, it sounds brilliant. Spears has released a great single as part of her comeback and her fans will love it.

We love it as well, even though it does sound like Britney Spears has recorded a Breaking Bad ode or anthem for Jesse Pinkman. We still think that Aaron Paul and Britney should team up to record a special version of the song, Work B*tch. Listen to the song below and tell us. Does the chorus make you think of Jesse Pinkman?