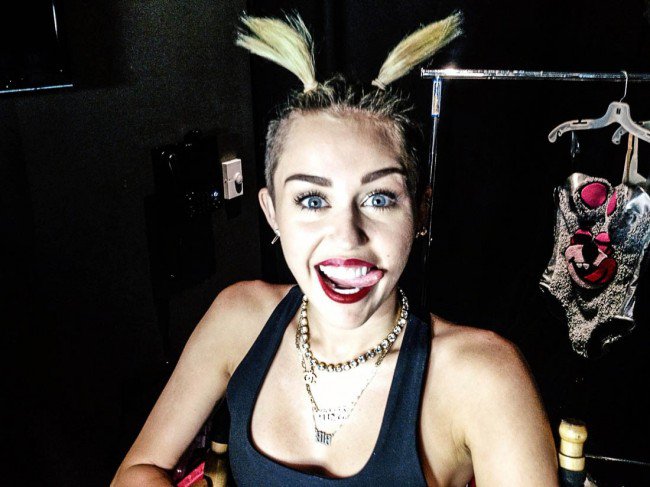 The trend of hitting Twitter to air dirty laundry is not something new, but it is a fascinating path that tends to take over celebrity lives. Like any wreck, it is intriguing to rubberneck but at times embarrassing to witness. When the average young woman is mad at her boyfriend, ensues the silent treatment or a litany of profanity with a sharp final word as the phone is disconnected. In the world of Miley Cyrus she unfollows. Liam Hemsworth decided to spend the weekend watching the Floyd Mayweather match (can you blame him?) Miley did and she showed her anger by unfollowing her fiance.

A friend close to the Wreck…um, rather Wrecking Ball songstress states that Miley sent a “clear message” to Liam by unfollowing him. Currently, it seems Liam may not be taking it seriously or is completely unaware, because he is still following his wanna-be P!nk lover. Not sure what poll was taken to determine unfollowing your fiance calls for an instant break-up, but that’s what media reports are advising and friends close to the twerking star seem to agree.

When neighbors hear the couple next store fighting, they may grimace or look for the nearest glass to enhance hearing capability, grinning at their own significant other. There was once a demand of privacy to hide fights now it seems social media has become the favorite landing pad in this tacky trend of the modern day breakup. Miley joins others who took to Twitter to send a message to a loved one or formerly loved one:

The list continued of cringe-worthy tweets and consideration was given to add to this impressive list, but it was just too embarrassing to continue. Of course, the names on the list are not so surprising. It makes one wonder what former couples think when they handled things in a more mature matter, even if just on the surface. Amy Poehler/Will Arnett, Josh Brolin/Diane Lane, Courteney Cox/David Arquette and Vanessa Williams/Rick Fox are just some of the celebrity couples who remained classy after a breakup.

Celebrities used to be about promoting their careers, keeping their personal lives private and displaying talent over tactic. Now between outlandish behaviors, twerking and Twitter breakups, the mold of an interesting celebrity has changed. Miley Cyrus unfollowed her fiance and this move of non-verbal communication sends the wrong message. Maturity sits in communicating, treating oneself with respect and most of all, keeping the breakups and fights off Twitter. There are a few items Miley should reconsider before doing them; tweeting, twerking and the tongue.