Candy Crush Saga Breaks Algorithms: But Is It Evil? [Video] 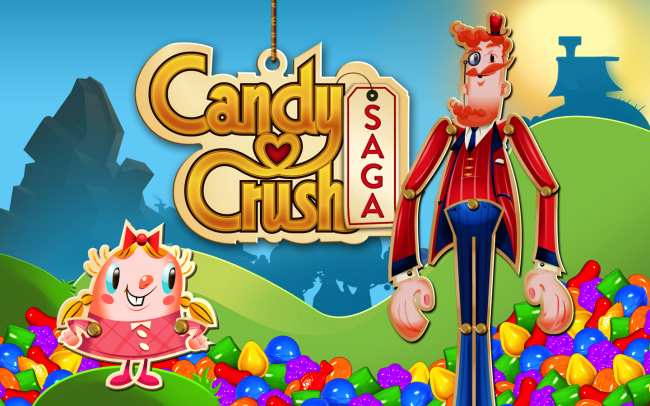 Candy Crush Saga, a video game produced by King.com, has taken the social gaming world by storm, becoming the most popular game on mobile devices. The Bejewel-esque game was released in April of last year, and has been so well received that the algorithms established to monitor its success have gone caput. But, is it evil?

A market researching corporation, called AppData, is responsible for overseeing the activity of Facebook gaming and application usage. According to company officials, Candy Crush Games was so overwhelmingly popular, beating its competitors into a bloody pulp, that the algorithms coded to measure its size were unable to keep up.

The group have stipulated that they will be revisiting its datasets for the game, going back almost half a year, in an attempt to cast a more accurate prediction of its popularity.

According to The Wall Street Journal, in light of recent projections, the company has reported an estimated figure of 132.4 million players who enjoy the game’s many offerings every month.

King.com’s astonishing rise to corporate fame has been somewhat unprecedented, even outshining industry giants, such as Electronic Arts and Zynga, in achieving higher active player numbers. As things stand, King.com has double the number of monthly players as the social gaming company, Zynga.

Adding to this barrage of statistical news, Bgr.com wades in with their two cents, claiming that Candy Crush Saga has ascertained an enormous following from iPhone users, with over 20% of the mobile owners having played the Candy Crush Saga application.

So what do players get from this algorithm-breaking game that has managed to smash so many records? Simply put, Candy Crush Saga is based upon the typical bejeweled format, whereby players are required to match three particular types of candy by switching individual pieces around, in either vertical or horizontal direction. 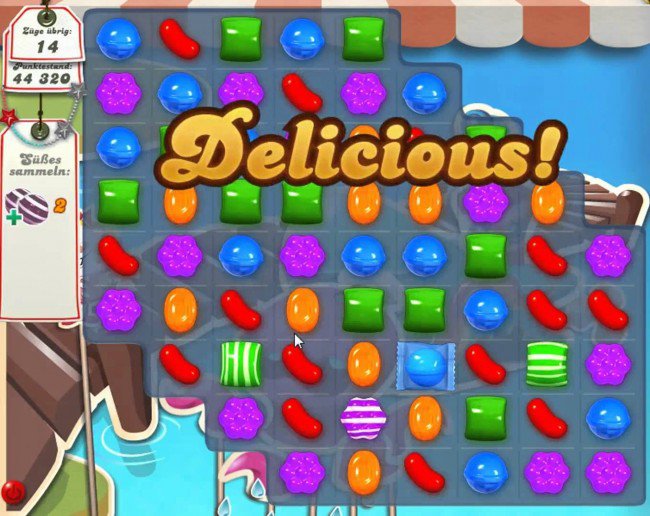 The game is segmented into separate levels, each with a specific set of objectives. For example, players on one particular mission may be tasked with removing a particular ingredient, whilst another may involve simply attaining a particular score.

Failure to successfully complete a given level results in one of five lives being deducted. Although lives will be restored every half hour, players can also elect to pay Facebook credits, or request the assistance of Facebook friends, to bump up their health tally. In addition, the game’s structure also relies upon certain players to dole out Facebook credits in order to unlock levels.

The game has a number of gameplay modes, including Moves & Score, Jelly, Ingredients, Time Limited and Candy Order. Taking “Jelly” as an example, the player’s game board is coated in a viscous substance that must be eliminated before running out of potential moves. On the other hand, “Ingredients” requires the player to deliver a prescribed number and type of materials to particular areas, before running out of moves.

Sugary delicacies of the same color can be aligned to yield special powers. For example, Candy Bombs enable the entire grid to be cleared of a specific type of candy, whereas Striped Candy units can nuke an entire row. 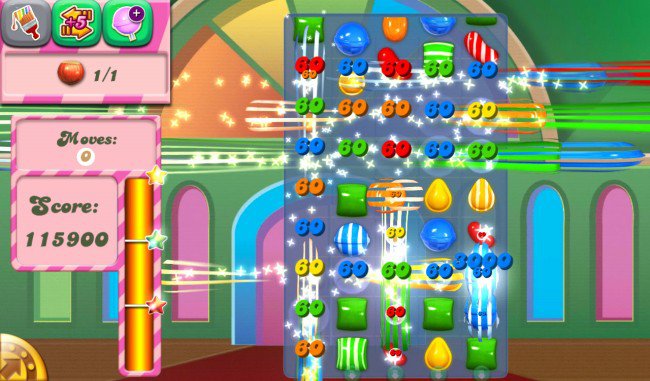 Throughout the myriad of playable levels, a series of obstacles will present themselves, ramping up the difficulty. Chocolate segments are introduced, which begin blocking off parts of the grid; this chocolate can be removed, however, using special candy combinations. As the player progresses through the game, more varied obstacles are thrown into the mix, substantially increasing the overall challenge.

The great thing about Candy Crush is the continued updates that its fanbase can look forward to. Currently, over 380 levels are available to play on the Facebook and smartphone editions, a figure which continues to rise as the game developers continue to pile on more and more levels.

Candy Crush Games has the ability to keep the player hooked. Even when encountering a seemingly unbeatable level, fatigue and frustration is always replaced with one’s desire to continue playing the game and strive forward to continue level progression.

According to the game developers, Candy Crush Saga was specifically designed to target the female audience, who traditionally resist succumbing to the video gaming market. The game was also created to form a habit in their fanbase.

According to CNET News, Jamie Madigan, who investigates the psychological impact of video games, had this to say:

“We know from studying how habits are made that they are often born out of routine…So if you pick the game up over your morning coffee every day, or play on your lunch break, or play as part of your getting ready for bed routine, it will become a habit.”

The entire game uses highly addictive sounds, music, words and a format that serves a single purpose – to keep the engaged and coming back for more. The following sensationalist video adequately summarizes the features that Candy Crush implements to appeal to a subject’s addictive nature (just give it a chance).

OK, so evil may be a very harsh, over-the-top term to use. But, addiction is the key to the success of these algorithm and record breaking social gaming platforms. It’s almost like placing an animal in a Skinner box and watching it push a button to acquire a reward. The same reward, albeit on a different scale, is granted to players when they transition to the next level in Candy Crush Saga. Even during the game, snapping a combination of candies in a line, to create a special power boost, provides an indescribable buzz that keeps the player endlessly hooked.

6 Responses to "Candy Crush Saga Breaks Algorithms: But Is It Evil? [Video]"