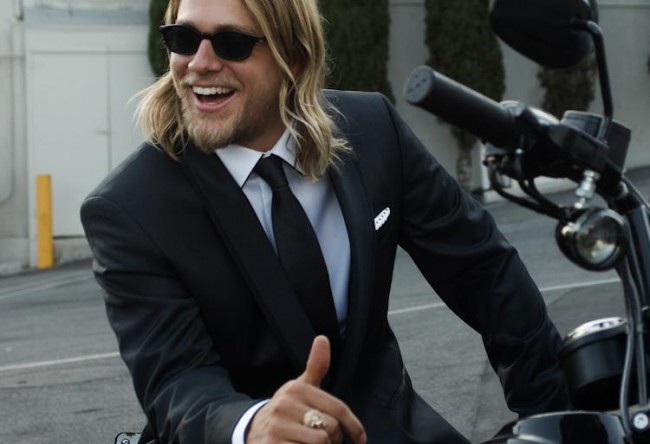 Fans were kind of enthralled when Ian Somerhalder led the intense pack of potential male leads for the Fifty Shades of Grey movie. His intense bedroom eyes, and shock of dark hair enamored women across the country. Then a stunning turn was created when Charlie Hunnam was announced by E.L. James today on Twitter.  The golden boy of Sons of Anarchy created a questionable head tilt; some approved and some showed their disappointment. Known as none other than Jax Teller, the VP turned Prez of SAMCRO on Sons of Anarchy, the blonde heartthrob will take the role of Christian Grey.

Hunnam, 33, matches the overall description of Christian Grey from the books. The elite lead of the S&M series is known as tall, young, attractive with dark copper-colored hair and intense, bright gray eyes. If truth be told, it seems the role was carved for the growing star. Hunnam may be known for his cut in SOA, but he has lived an exciting career since his younger years.

Born in England, the on-screen son of Gemma Teller Morrow, made his debut on a UK show called Byker Grove. Thereafter, he was cast as Nathan Maloney in Queer as Folk (UK version). This was the major role that thrust the Englishman into the spotlight for advancement into the world of casting and acting.

Entranced by the idea of growing his career, Hunnam relocated to LA to pursue American based film and television roles. In 2008, he was called in to play the role of Jackson “Jax” Teller, VP of a rogue, motorcycle club in California. On the show, audiences were treated to many backside shots of the former ‘Pacific Rim’ actor.

Now Hunnam is relocating back to the big screen to star as dominant, Christian Grey. If rumors are correct, fans will be treated to a whole lot more than Hunnam’s derriere. Millions of fans of the books written by E.L. James are anticipating the big screen adaption of the book, in all degrees.

The role is intended to expose a darker side of pleasure, by bringing together a long-time sadist with shy student Anastasia Steele. The book has spoken to millions of women who have sighed over the sexy and safe dominance from the pages of the sizzling book series. E.L. James has accomplished an amazing feat as a novice author; her book quickly reached superstar status by earning more than 1 million in sales with the first trilogy.

By now, fans are aware it is the daughter of Don Johnson and Melanie Griffith who will take the role of Anastasia Steele. Dakota Johnson brings the innocence to the character role with her understated good looks and sweet smile. Johnson has clearly stepped into a role millions of women will envy.

It will be exciting to see the chemistry both of these young actors will create on the big screen. Further yet, are questions surrounding Hunnam and his continuing role on Sons of Anarchy. Right now, no word has escaped Hunnam would leave the show. The long-time running series has reached a dedicated fan-base of over five million viewers.

These same viewers may be willing to see bad boy Jax Teller turn from guns to blindfolds and other interesting toys next August. One person who was thrilled with the announcement awas none other than author extraordinaire, E.L. James. James has enjoyed the rambunctious sales of the books and with the total series combined, it has sold over 70 million copies across the globe.

The success of the movie is still up for question. The fan-base is pretty obvious, not a whole lot of guys are rushing to grab the books, and it can be presumed not many males will be rushing to grab movie tickets. Well, not unless they have a very interesting first date in mind. Additionally, it is predicted the movie will be R-Rated, since hints have dropped of the intense sex scenes and rampant nudity to be shown.

While the movie will boost the career of Hunnam, it can almost be guaranteed he will remain the SOA man in charge. From Jax Teller to Christian Grey, are you looking forward to watching Hunnam on the big screen next August?

11 Responses to "Charlie Hunnam from Jax Teller to Christian Grey"