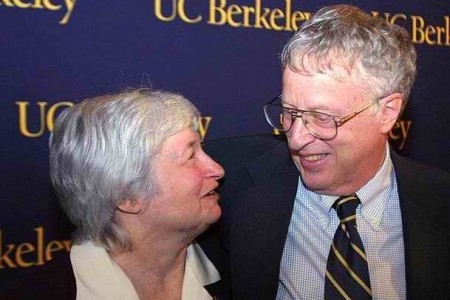 Janet Yellen has had an extraordinary career at the Federal Reserve and many say she owes a lot of it to the power of true love that she found there.

Janet currently holds the No. 2 seat at the Fed and President Barack Obama is expected to nominate her as the next chairman when current chairman, Ben Barnanke will retire.

If the Senate approves her nomination, she will make history as being the first woman to run the Federal Reserve since it was started 100 years ago.

Janet’s love story begins in 1977 at a casual luncheon at the Federal Reserve. There she met the man she would marry in less than a year. What seemed to be a whirlwind romance at first became the force that helped her rise in her career.

Her husband’s name is George Akerlof. In 1977, he was only on temporary assignment to work for the research division at the Federal Reserve in Washington.

When George and Janet met, they not only had an instant connection, but they had the same views of how economic policy affects society. This spark led them to become one of the  most distinguished power couples of modern economics.

They were able to collaborate on painstaking research while they inspired each other to push through with very demanding separate careers. They also had a son who now shares the same passion for academics in his adult life.

People who have known the couple for a very long time say Janet and George really helped shape each others’ professional successes. In 2001, George received a shared Nobel Prize in economics. In his autobiography for the Nobel Foundation he notes how happy he is to have been able to collaborate with his wife for over a decade.

He states, “Not only did our personalities mesh perfectly, but we have also always been in all but perfect agreement about macroeconomics. Our lone disagreement is that she is a bit more supportive of free trade than I.”

While they are similar in their economic views, Janet and George have distinguishing differences as well. Those close to the couple say that George is extremely creative and less disciplined while Yellen is very logical and sensible. The economic research they have conducted together embodies a nice balance of artistic ability and rational thinking.

After several different career changes for both of them, in 1994, Janet was appointed to the Federal Reserve’s board while George continued to teach. When Janet moved to former President Bill Clinton’s Council of Economic Advisers, George stayed at home to raise their son.

While dealing with political turmoil in her day-to-day job, she came home to a supportive husband who helped her cope with career pressures and still made her feel wanted as a mother and wife.

Now on the brink of her being appointed chairman of the Federal Reserve and making history, her husband still continues to happily support her. Many find it ironic that a Nobel laureate who works in the same discipline as their spouse is less famous than their spouse.

The amazing thing about the couple is they have managed to do it all: have extraordinary careers, raise a successful child, and stay happily married after many years in a world that only prioritizes marriage half of the time it happens.

Friends of the couple say that Janet Yellen will make a great chairman not only because she is very deserving, but because the love in her life, George Akerlof gives her the inspiration to keep doing great things on her own and when they work together.