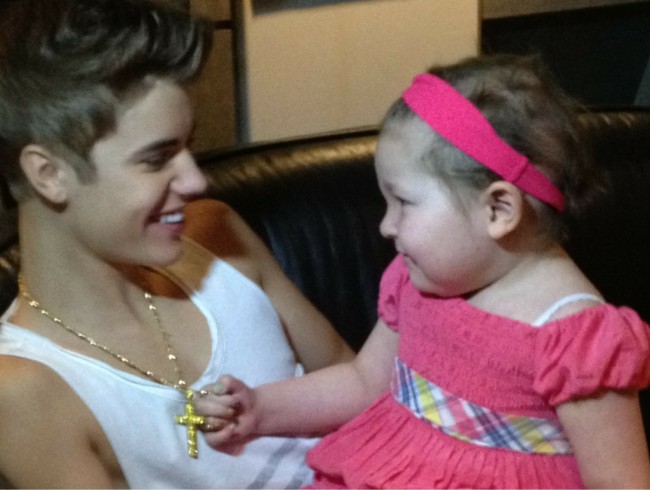 Get your Kleenax ready! Justin Bieber can be mentioned for antics not positive for his image, but many still respect the young sensation. Especially, on days he takes a moment from his insanely busy schedule to reflect on a very special someone who changed his life. Avalanna Routh, affectionately dubbed as Mrs. Bieber lost her battle to cancer this day, last year. The star singer took a moment to send a tweet, reflecting on his connection with the 6-year-old darling.

On February 14, 2012 after an online campaign caught the eye of Bieber, he flew out to New York to spend the day of love with the young patient. That day little Avalanna was not a cancer patient, she was an excited young girl who had a mini-crush on a sweet young man who spent time with her. Bieber settled in for the day and played board games, enthralling in Avalanna’s sweet cheek kisses and happy laughter.

Mrs. Bieber touched not only the heart of Bieber but of millions of people who followed the youngster’s story. A year has passed since her sad death, but the path to find a cure continues. Avalanna was diagnosed with a rare cancer called AT/RT (atypical teratoid rhabdoid tumor.) The tumor, per the Dana-Faber organization is a very rare and fast growing cancer of the central nervous system. The organization is linked at the end of this article for more information.

While other articles of Bieber are surfacing of his goofy spanking from Zach Galifianakis, and his questionable antics surrounding his comments about the show Intervention, one impact of today was the superstar’s moment to stop and reflect. It allows a moment of remembrance for Avalanna and the amazing feeling Bieber shared over a year ago:

Avalanna was diagnosed with AT/RT when she was a tender 9-months old. Doctors never considered little Mrs. Bieber would live to see past her first birthday. The beautiful angel broke the barriers of possibility and not only survived, she lived. In an article today on the Huffington Post, Aileen Roberts, Avalanna’s mother spoke about her daughter. Roberts commented on her daughter’s love for life, her happiness and embracing of laughter.

Roberts mentioned the beautiful little comments her daughter would drop at times, creating a smile even today. The strong mother shares each day is a struggle since she lost her precious angel a year ago. Roberts grief hums under the very essence of her strength to carry on. The amazing mother started a foundation called Cure AT/RT Now (also linked at the bottom of this article.) With Bieber, Roberts spoke of the “Meet Justin Bieber” contest to bring awareness to the rare childhood cancer. 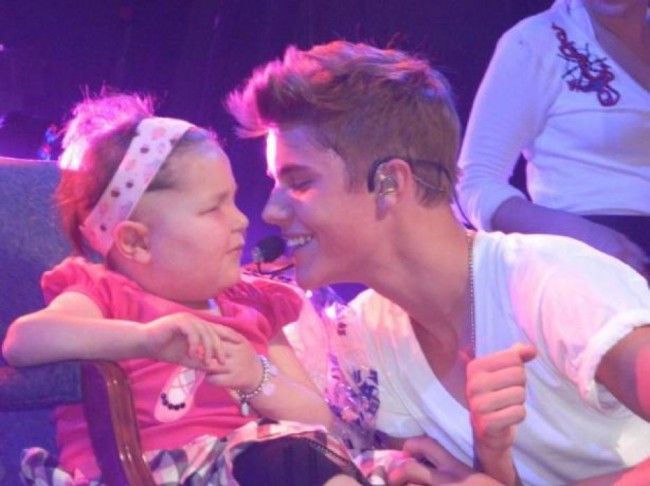 Today marks the first year anniversary of Avalanna’s death, a day that never goes by without thought for Roberts. Everyday she is reminded of her beautiful angel, days like today increase her grief, but it helps Roberts to express to the public her gratitude for the support. Further yet is her gratitude to Bieber for bringing a much needed spotlight to the foundations that look to find the cure of this childhood terminal illness.

Bieber took a moment from his busy life, entertaining antics and controversial comments to reflect on a  moment that changed his life forever.  Avalanna, dubbed as the only Mrs. Bieber passed away last September. In her path she left a legacy of remembrance, affection and touched the hearts of millions. Roberts shared the bracelets sold in honor of her daughter’s name and path for a cure. Simply colored purple and yellow, the angel’s favorite colors, Roberts shares the three words that emphasized the brilliance of her daughter: Live, Laugh, Love.

Regardless your opinion for Justin Bieber, this video emphasizes his love for the little girl that stole his heart.