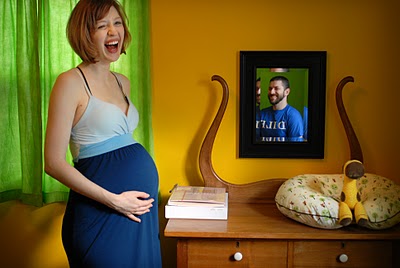 Thanks to Hollywood, the general population is provided with graphic images and scenes depicting childbirth as a painful and undesirable experience.  There is no doubt, these suggestions contribute to the actual sensations women feel during labor and delivery, as the mental imagery and fears built up around the experience manifest as their reality.  More and more women are beginning to discover, either by first hand experience, or through recent reports, that birth doesn’t have to be painful.  In fact, it can, instead, be orgasmic.  What helps to create the experience of orgasm rather than extreme pain in labor?  Some believe that practicing deep, rolling laughter, as taught in laughter yoga, can lead to an experience equal to orgasm during the birthing process.

First of all, what is laughter yoga?  Laughter yoga is a method of obtaining a stress-free, peace-enhancing experience through laughter.  Developed by a medical doctor in India, laughter yoga is relaxing and healing the world through its simple techniques and humorous methods.  When the body engages in deep laughter, whether self-created or genuine, the brain and body systems do not know the difference.

The effects of laughter are amazing including a reduction in blood pressure and significant drop in cortisol levels equating to a stress-free experience.  When we laugh, more oxygen ends up in the tissues of the body.  Laughter also encourages the body to produce oxytocin, the same hormones released during labor which relaxes the cervix.  Laughter has also been shown to reduce pain by blocking the message to the brain that pain is occurring.

The truth is, when labor begins and the birthing process ensues, there are going to be sensations.  The laboring mother will need to find a way to express herself and relieve whatever is uncomfortable.  Often moaning and groaning are normal responses, if it gets really intense, screaming and loud cries could be uttered.  But what if a woman trained herself to go into laughter instead?  Could laughter in pregnancy lead to having an orgasmic birth?

More and more women now are experiencing orgasmic births.  The baby is stimulating the vaginal walls, which are sensitive to relaying messages of pleasure, as during sex.  A study conducted in France asked over 950 midwives to complete surveys about the births they attended and how many women had orgasmic births.  109 midwives responded to the questionnaire.  Collectively, these midwives had attended over 200,000 births in their career.  Of the reported births, 668 mothers claimed they had experienced orgasmic sensations during labor.  In 868 other instances, midwives had reported observing mothers experiencing something akin to sexual pleasure during their birthing process.  Nine mothers wrote reports confirming their orgasmic births.  Here is one mothers response:

The main thing to focus on, when preparing for the birthing process, is how to cope with intense sensations.  If a mother trains herself by practicing laughter yoga daily, she is more likely to bring this method to mind and utilize it during labor.  Mothers who tone and chant during pregnancy often resort to using the same sorts of sounds during labor, which can also minimize pain and assist in the relaxation of the cervix.  Screaming and yelling, on the other hand, tend to cause more pain as they tighten the cervix and release more stress hormones in the body.

The cervix and vaginal walls are very intimately connected to the throat.  When a mother is closed off in the throat, as in screaming or simply in the experience of anxiety, the cervix responds by closing up.  This has been documented in many reports where relaxed and dilating women birthing in hospitals suddenly close up when strangers or even their male doctor comes into the room.

From A Good Birth, A Safe Birth by Diana Korte and Roberta Scaer:

Biologically, you are designed to receive great pleasure from your body not only during lovemaking and intercourse, but in birth and breastfeeding, too….Birth offers sexual pleasure on a continuum from pleasant sensations (felt while your uterus rhythmically contracts in early labor if you’re relaxed and feeling secure) to an intense birth climax (yes, just like an orgasm) as your baby slithers into the world of your waiting arms.

Laughter helps to relax the body, reduce pain and release oxytocin, all critical elements for a smooth, easy birthing process.  Can laughter practiced regularly in pregnancy lead to having an orgasmic birth?  Currently there are no specific studies relating the two, however, as a pregnant woman in her 7th month of pregnancy, I am going to give it a shot.  It’s worth a try.  I’ll be sure and let you know.  Here is a beautiful video depicting orgasmic births:

7 Responses to "Laughter in Pregnancy Leads to Orgasmic Birth?"