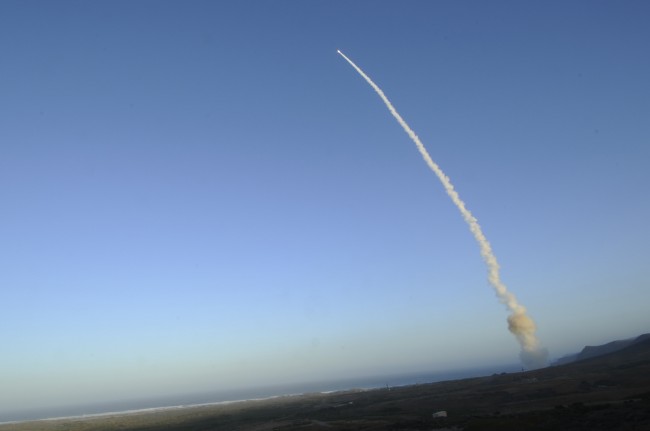 A LGM-30 Minuteman rocket, or the Minuteman III, completed a test this morning from the California Air Base located some 140 miles north of Los Angeles. The letter “L”, in “LGM”, stands for a silo-launched missile; the “G” stands for ground attack; the “M” stands for guided missile. The “Minuteman” designation refers to the Minuteman Militia during the revolutionary war, a group ready to respond at a minutes notice to engage the English. In the same way, the Minuteman III can be prepared and launched in a few minutes with proper code authorization.

The test itself is not as concerning as what day it follows and the day the next test is scheduled for. September 21, 2013 was the International Day of Peace and it could be taken as a slap in the face of the world community, and the larger world peace process, that the US decided to test an InterContinental Ballistic Missile (ICBM) capable of nuclear warhead deployment mere hours after its end.

As reported by allvoices.com, Rick Wayman of the Nuclear Age Peace Foundation spoke of the ill timing of the US missile tests. Not more than three hours after the end of the “Day of Peace” the US tests a Minuteman III ICBM. Not only that, but it seems that the US is planning another test, later this week, on September 26, 2013.

September 26 of this next week is significant because it is the day scheduled for high-level talks in the UN for nuclear disarmament in New York. It seems a bit incongruous that we would participate in high-level talks with many world leaders about nuclear disarmament when we plan on testing an ICBM capable of deploying any one of our 7,700 nuclear warheads to anywhere in the world. (This number of warheads is according to Global Zero a group promoting the elimination of all nuclear weapons in the world.) This nuclear weapons test from Vandenberg Air Force Base seems a bit ill timed.

While both the US and Russia like to talk about how they are reducing the number of nuclear weapons they have, there has been no significant moves to actually get rid of them. A fact that has not been lost on the rest of the world. It is not only a resistance to eliminating their nuclear weapons stockpiles that is a slap in the face to the rest of the world community, it is the fact that both countries continue to improve the delivery method as well as modernizing their arsenal.

Whether this is a calculated test politically or not, who can say for sure. Yet, the implications of these actions, on the day after the Day of Peace and the day of nuclear disarmament talks, seems to speak volumes.

There was a point in time when America was the noble country of morals. We would take the hard steps first to address freedom and cooperation. Yet, we seem to be terrified that if we actually get rid of our nuclear stock pile that we will be at the mercy of other countries.

Nuclear Weapons Test from Vandenberg Air Force Base added by Iam Bloom on September 22, 2013
View all posts by Iam Bloom →

One Response to "Nuclear Weapons Test from Vandenberg Air Force Base"