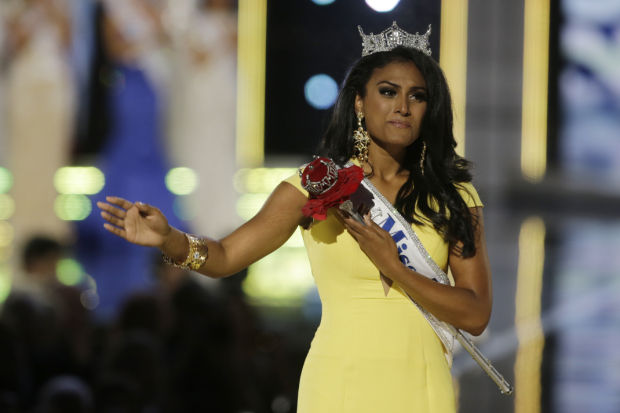 There is a mantra, being beautiful isn’t easy. Nina Davuluri is beautiful and now holding one of the country’s most popular crowns. A waterfall of midnight hair, dark exotic eyes and dusky skin is her image. Grace, beauty, and confidence her delivery. Being labeled as the first Indian-American to win Miss America was prompted over her traits and her talents. When ethnicity is mentioned, racists stemmed from the rotted woodwork to deliver nasty comments about the young beauty.

Winning the Miss America title alludes many she will be labeled as a number one search around the country and possibly the globe. A simple search on Google may alert naysayers of a few things:

Turning a beauty contest into a reason to deliver nasty messages is crude, unAmerican and shows how negative self-hate can truly be. Ever the classy Miss America, Davuluri raises her chin past the comments and states she has and always will see herself as an American “foremost.”

Personally, there were two ladies who marked Miss America with power, confidence and the ability to rise above controversy. That was the winner Miss America Nina Davuluri and Miss Kansas Theresa Vail. Vail marked talent, tattoos and tact. She is a beautiful and strong woman. Both of these gorgeous women brought their own level of awareness to this country. They should be celebrated, not used for personal grudges of anger, hate and ugliness. Miss America should bring together women from sea to shining sea. Empowering the ability of confidence, the feminine inner lioness and demanding respect from their word.

This morning showed how the smaller group of ignorant racists shouting from their mini soapbox can mar the win and even take control of the media. So, what were some of these nasty comments? Below are some of the disturbing comments:

One area most can agree with is when Jakeamick5 used the hashtag #idiots. Yes, there seemed to be a plethora on Twitter last night. Have a disagreement with who won, that’s natural. Have an intelligent debate or a catty one. Sure mock how someone’s bikini was not cute, or how annoying the responses were. These are natural levels of criticism throughout a competition, especially one on a national stage.

The new Miss America was crowned and her name is Nina Davuluri. She is beautiful, intelligent and talented. She was born in Syracuse, has a winning smile and her most controversial moment was being overheard for calling another contestant fat. Make judgements on her walk, her talent, her bikini or her responses. To take to Twitter to deliver nasty racist comments is crude, disgusting and utterly unnecessary. It shows a level of mass ignorance and continues to stigmatize this country backwards. See Miss America for what it is: A group of beautiful women aiming to win, don’t draw ethnicity into it. See beyond hate to embrace the beauty.