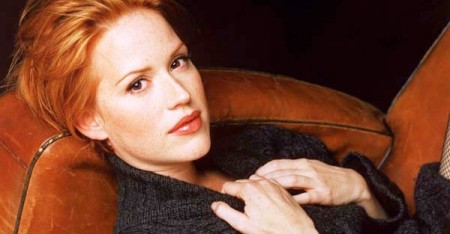 I took a trip to Salem, Oregon last night to see Molly Ringwald in concert. I haven’t seen this woman since I was a kid watching The Breakfast Club and Pretty in Pink. I didn’t know what to expect, though the tickets were free and so was my evening, thanks to my beloved household.

The evening weather was brisk but comfortable and the Elsinore Theater was packed in Salem, Oregon. This woman can draw a crowd. My friend and I were seated in row L, which ended up being a near side seat, left of the stage just a bit. We had a perfect view and the acoustics in there were magical.

The stage was decorated with a baby grand black piano, the most gorgeous bass I’ve ever seen, a set of drums sparkling with silver notes and a man holding a gorgeous sax. As the band members of her quartet filled in their spots, the lights dimmed and Molly stepped out to take her place on stage.

She was wearing a short sleeved black, gently ruffled dress that hit her mid-thigh and I have to say, she looked great. It was obvious that she worked out on a regular basis and cared about her body. The most admirable quality I noticed right off with Ms. Ringwald was her authenticity and genuine nature with the audience. She was fun, down-to-earth and unafraid to be herself.

Immediately upon introduction of the band and herself, she pointed out her new album Except for Sometimes, which she comically informed the audience she would be repeatedly directing our attention to throughout the night. And she did, roughly eight or nine times.  Her voice was incredible as she covered hits from America’s most loved songs over the decades including a smashing performance of I Feel Pretty from West Side Story which she mentioned being terrified of.

Molly Ringwald was as enjoyable to hear as entertaining to watch.  The relationship she had with her band members was endearing and you could tell she is having quite a ball up there.  She mentioned writing songs for each of her three children, which she sings to as they go to sleep at night.  She even sang one song in French, giving credit to the ten years she spent in France apparently eating a lot of cheese and drinking wine.

A most unique ending to the night came when she suggested the encore come before she left the stage to save us all the rigmarole of the whole thing.  The audience comically agreed through applause and much shouting after which she concluded with the famous tune from The Breakfast Club “Dont’ Forget About Me” dedicated to John Hughes.

Molly Ringwald will be singing jazz again in Portland tonight at the Newmark Theater starting at 7pm.  If you have the evening free – give her a chance, she promises to deliver a stunning performance packed with memories and style.