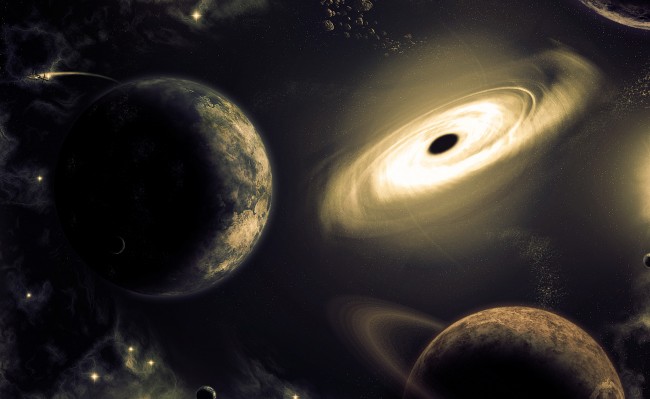 NASA recently stumbled across 10 previously undiscovered supermassive black holes, using its Nuclear Spectroscopic Telescope Array (NuSTAR). NASA is hoping this is simply the beginning of their good fortune, as the team anticipates hundreds of potential discoveries to emerge from the depths of space.

The trigger of these space monsters has been the source of much debate amongst leading astronomers. One theory posits, supermassive black holes materialize upon a star’s demise, as matter is squeezed into a very small volume. The extreme density of this matter instigates powerful gravitational forces, from which even light cannot escape.

Many of these black holes have been identified indirectly, by detecting X-rays emitted from the accretion disks, surrounding their cores. The accretion disk arises from the influence of the supermassive black hole’s gravitational forces, slowly drawing streams of matter ever-closer, which slowly revolve around its center. As the matter proceeds towards its fate, it experiences frictional forces that cause it to release detectable, high-energy radiation. This radiation can then be measured by X-ray telescopes, such as NuSTAR.

NASA first deployed NuSTAR into orbit during June of 2012 to conduct “deep observations of the galactic sky.” Primary objectives include investigation of supernova remnants and execution of black hole studies.

The telescope represented the first orbital telescope to focus light in the high-energy X-ray region (between 6 to 79 keV), and boasts an array of instruments, including two specially-designed, grazing incidence telescopes, alongside new detection methods that surpass those of Chandra and XMM.

David Alexander, one of the NuSTAR crew members, based at the Department of Physics at Durham University, England, explains the chance discovery:

Based upon these startling revelations, Alexander believes further unforeseen findings could be made. Therefore, the NuSTAR group plans to revisit previous imagery, acquired during the sophisticated telescope’s previous missions, in the hunt for other potential black hole sightings.

However, in light of these unprecedented results, the researchers have already investigated data collated from the European Space Agency’s XMM satellite and NASA’s Chandra X-ray observatory, which detect lower energy X-ray emissions. Astonishingly, NuSTAR’s less capable counterparts had already stumbled across these black holes, during a series of entirely separate missions; however, the findings failed to stand out, and did not appear to warrant further inspection.

During a recent press announcement, Alexander boasted about the amazing work that NuSTAR has already achieved, and briefly described the telescope’s role in the future of black hole research:

“We are getting closer to solving a mystery that began in 1962… Back then, astronomers had noted a diffuse X-ray glow in the background of our sky but were unsure of its origin. Now, we know that distant supermassive black holes are sources of this light, but we need NuSTAR to help further detect and understand the black hole populations.”

These so-called X-ray glows are easily delineated using NuSTAR’s innovative technology, which can detect much higher frequencies. Higher energy X-rays are capable of transiting through the glass and dust that surrounds

Daniel Stern, project scientist for NuSTAR at NASA’s Jet Propulsion Laboratory (JPL), maintains they are already learning fascinating details about some of these newly identified black holes. The astronomers’ early findings suggest many distant supermassive black holes appear “encased” within larger galaxies; Stern theorizes, back when the universe was still in its infancy, bigger galaxies were constantly colliding, coalescing and expanding, a process which explains this observation.

NuSTAR is due to continue its black hole hunting initiatives. In the mean time, it will also remain on the lookout for other points of cosmological intrigue. Discovering 10 entirely new supermassive black holes, by mere fortune, is quite a feat. Let’s hope more groundbreaking findings are inbound.