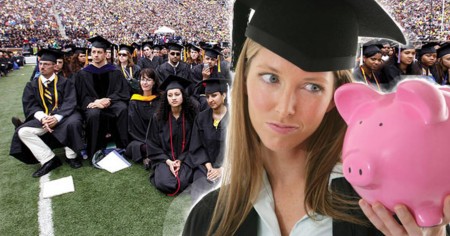 For many students they too turn down top salary jobs to teach or serve their communities or country. While making ends meet with what they have, they at the same time experience the satisfaction that they are doing what they love and doing something good for their community and/or country.

For instance, students who want to be teachers or work in other public sector jobs which serve their communities or country and don’t get paid six-figures have the opportunity to have their student loans forgiven. Now, many students may choose not to pursue the security of private sector jobs but of those in education, military, firefighting or policing. Still, employers are hoping with this student loan forgiveness program that students will enter these fields, but many are still looking for other incentives to attract students once they graduate.

“Teachers, soldiers, firefighters, policeman – public sector careers invariably involve some effort, some inconvenience or some sacrifice. People give up higher incomes to serve their city, their state or their country. We believe that people who contribute part of their talents, part of the benefits of their education, to society as a whole should not be mired in debt because they stir themselves to the calling of public service,” says Richard Cordray, director of the CFPB. (Huffington Post)

Many students may not know of this program and ultimately decide on a career not in the public sector just so they can pay their student loans. With 33 million workers qualifying for this program there is a need to get the word out to workers who used student loans to fund their education. Employees who work in education represent the biggest majority to benefit from this program with 6.8 million. As 435,000 teachers will be in need nationwide by the decade end, according to the Department of Education.

Most teachers in America begin with a salary of less than $36,000. With student loan debt hitting $1 trillion it is no wonder students choose higher paying careers such as America awards athletes, CEO’s and investors. Those teaching America’s future, treating the sick, protecting our country, states and cities are being paid the minimal due to cuts. Still, many find their passion in teaching, and/or serving their country, state, city or treating the sick as more important and prefer to do what they love.

It is a tough decision for most, but for some Americans following their true passions and serving others is far more important. For some, helping a student to read, graduate high school, treat a sick person, serve their country, state or city is rewarding enough. This student loan forgiveness program is just that much more worth having because many sacrifice high paying salaries and big titles in corporate America to serve America’s youth, sick and protect America’s freedom.

Currently, the Consumer Financial Protection Bureau is asking for Congress to review the student loan forgiveness program and are pushing for employers to educate their employees on this program. It’s time voters pushed for their Congressional representatives to review this program and enforce it for it can help take some drag off the economy while employing more teachers, firefighters, police officers and many other public service jobs.