By Angelina Bouc on October 27, 2013Comments Off on Breast Cancer in Men: Symptoms and Awareness

This past weekend saw the gathering of thousands in Baltimore, walking for a cure for breast cancer. The American Cancer Society leads the way with a lawn covered in pink, and hearts filled with emotion and strength. Yet, from within this circle of survivors and those looking to prevent cancer from taking another relative – a small voice is slowly rising to a roar. Breast cancer in men is beginning to grow in numbers that is calling for a reform of awareness. Will the sea of pink start receiving a hue of blue? More and more men are going public to announce their own diagnosis. Breast cancer shows no gender bias, it also attacks men. Men may not expect to ever encounter this condition, but knowing the symptoms and becoming aware of it is necessary.

While women have a significantly higher chance of being diagnosed with breast cancer over men; it is men who have a higher mortality  rate. In 2013 alone, over 2,200 men have been diagnosed with cancer and over 400 will die from the disease. A look into this startling revelation shows over five different types of breast cancers that may occur in men.

There is Paget disease which is a cancer that develops in the breast ducts to the nipple. A firm, hard lump is discovered under the breast and may even create

harsh areas of scaly skin, that leaves the area around the nipples red and itchy. There is also gynecomastia, the most common of breast disorders for men. This condition may remain benign, but it is wise for men to have a doctor check for any lump  – this condition makes men appear as if they have small breasts. While this can attribute to a higher level of estrogen, having a doctor review the symptom may save a life. The awareness factor of the varying levels of breast cancers and disorders are needed to combat breast cancer in men.

What are symptoms for men to be aware of?

Ignoring these symptoms can result in the cancer spreading quickly to other organs of the body. Never ignore a symptom of concern; more and more doctors are becoming versed with breast cancer in men. Seek out a specialist for assistance to discover if the pain, hardened mass or fluid from the nipple may be cancer or another disorder.

Although men have significantly less breast tissue than women, this does not rule out the chance of receiving this terrible disease. Treatment and handling of the condition is treated similar to the way women are treated. Surgery (a mastectomy) may be performed by a surgeon to remove the tumor. Lymph nodes may be removed to determine if the cancer has spread, the surgeon makes this decision prior to the surgery date.

Radiation, chemotherapy and/or biological therapy will be prescribed by the doctor. Men who have been diagnosed with metastatic breast cancer are given drugs like Herceptin to prevent the continued aggression of the cell. The true way of stopping this disease is through awareness. Hundreds of men feel embarrassed to walk among a sea of pink, resulting in delayed diagnosis and treatment. 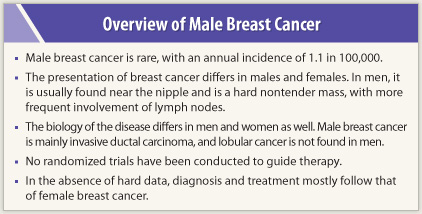 The Daily Mail spoke to breast cancer survivor, Mike Shroder who was  frustrated with pink ribbons and parades that depicted a female only illness. He shared his experience of joining a Susan G. Komen Race for the Cure event. A participant advised him he was in the line of survivors, he immediately responded he was a survivor and continued to support the event.

Shroder and his wife, who also was diagnosed with cancer and is now a survivor, have opened a restaurant in their hometown of Mason, Ohio. Every year the happily married couple place together an event to bring awareness of breast cancer that shows no gender bias. Sadly, thousands more of men go undiagnosed and hundreds die from cancer that has spread to other parts of their body. Awareness of this illness is mandatory for both genders.

For men who struggle with symptoms of the unknown and fear breast cancer, resources are available for assistance. The John W. Nick Foundation was founded in 1995 by the family of John W. Nick, who died of breast cancer in 1991. The family’s goal is to bring awareness and support men who suffer in silence from this crippling illness. The family encourages men who have a family history of breast cancer, to immediately seek their doctor for a check-up as the chances of occurrence are higher.

Susan G. Komen does offer resources for men who may have been diagnosed with breast cancer or need assistance to determine symptoms. The Komen center for men can be reached at 1-877 GO KOMEN. There are other sites such as Out of The Shadow of Pink that provide resources, guidance and support of men diagnosed with breast cancer. Catching the symptoms early on from awareness can aid the treatment and recovery for a long and cancer-free life. Breast cancer in men may not be common, but neither is it non-existent. The American Cancer Society is looking to broaden that awareness for immediate treatment for men. A growing awareness is beginning to blossom and amid the pink ribbons and t-shirts, a cry of blue for help is reaching out. 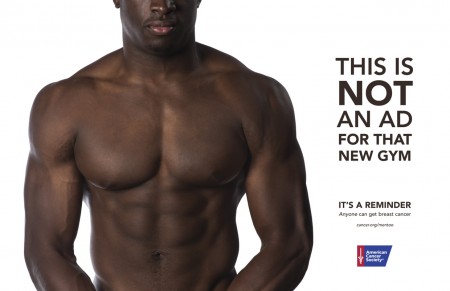 Resources
Out of the Shadow of Pink
Daily Mail
John W. Nick Foundation